Always believed in your strength 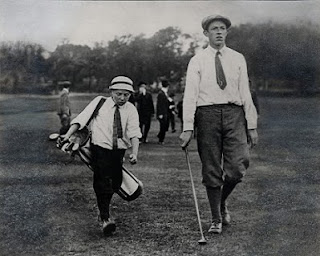 Francis Ouimet was born (USA) in Massachusetts on May 08, 1893 and grew up in a poor family. Because there was the residence of the family in the vicinity of a large golf club, Francis Ouimet was already as a child fascinated by the golfers. Early in the morning or in the evening he crept therefore unnoticed out of the house so as not to look at the course collected golf balls. With a low and used bat he practiced for hours to secretly pursue his passion. At this time, however, only an elite golf and affluent segment of the population was accessible, Francis Ouimet had no chance of ever being able to afford a formal membership itself.

At the age of 11 years managed Francis Ouimet, to get a job as a caddy at the golf club. From now on he was allowed to wear the Racketbags of golfers and watch them directly in their games. This he gained additional knowledge about golf and he studied every swing to the smallest detail. Besides, he did continue the game of golf itself in and practiced until he mastered perfectly the blows. It was not long until someone on the talented Francis Ouimet was attentive, watching him with his wide punches. He could now more often practice on the golf course and improve his golf game. In school he became one of the best young golfers across the country, what his father was but an eyesore. He took Francis Ouimet from school and sent him to work so he could earn money for the family.

Francis Ouimet managed despite hard work continues to find time to play golf. He trained tirelessly and also took part in the first ever golf tournaments. When in 1913 one of the largest golf tournaments in the world, the US Open, was held in his golf club in Massachusetts, the organizers were able to use a native talent well. So Francis Ouimet was allowed to participate, even if one admitted him virtually no chance. Because here came to the world's best professional golfers who wanted to win every tournament. Especially the overpowering golfers from Europe appeared to be invincible competitors.

Since Francis Ouimet could not afford a caddy, he committed further ado a ten year old boy from the neighborhood. As the spectators saw this team for the first time, she began to smile. They kept the participation of Francis Ouimet worthless because a former caddy had lost just nothing in this famous tournament. Francis Ouimet but ignored the mockery of him and relied on his own strength. Right at the start he let rip Therefore as the fire brigade and was after the first blows in the absolute top field. Those present believed at the beginning still a chance, as the talented but was Francis Ouimet at the end of the day still among the best golfers in the world, the surprise was perfect. Crowds now began to flow over the golf course to cheer on the hitherto unknown golfer who actually came from their own ranks.

However, the multiple Champions Golf Harry Vardon and Ted Ray wanted to do not just show up on a spirited amateur players. They put all their skills to bear in order to win the title for themselves. However, Francis Ouimet showed no weakness and played himself into a veritable frenzy. The competitor bounced off the mental strength of Francis Ouimet and despaired of his carefree style of playing. On September 20, 1913, the great sensation was perfect and Francis Ouimet became the first amateur player ever, the US Open. The news spread like wildfire around the world from the former caddy, which the most famous superstars could defeat in the Gulf.

Up to this incredible success of Francis Ouimet Golf was only rich people predestined and there was little public courses. Francis Ouimet changed this forever and opened the game of golf for the general mass and poorer. Due to the sudden increase in demand more and more courses were offered in America to learn to play golf. Were there in America in 1913 only 350,000 golfers, there were ten years later, more than two million golfers.

Francis Ouimet always believed in his strength, though he had to overcome poverty and social barriers. But with his courage and fearlessness, he rose to become a true legend in the sport and made it, the Golf today has become one of the most played sports in the world.