Dick Fosbury: "I was an uncoordinated athlete" 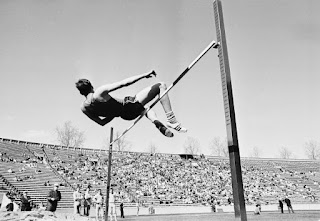 Dick Fosbury was born (USA) in Oregon on March 6, 1947, came because of its size very early in contact with the Athletics. He was very well suited for the high jump by his long legs, but he had with his coordination significant problems. The coach tried in vain to him the "scissors kick" or "straddle" teach where the Springer the latte had to cross face down. For Dick Fosbury these techniques were simply not to provide, as much as he tried. Although he was one of the worst-vaulter in his school and he was stamped on his coach as a hopeless case, he would not give up.

Dick Fosbury: "I was an uncoordinated athlete"

Dick Fosbury began to experiment as he could cross the bar best. He combined different styles and tried their own movements, which fit him better. He had an intuition that the jump had to work the other way around and jumped in a student competition at the age of 16 years for the first time backward over the bar. Dick Fosbury had the feeling of having his perfect jump style found and trained resolutely. So he was able to improve step by step and always skip greater heights. But Dick Fosbury was not taken seriously with this unconventional technique.

Dick Fosbury: "It was especially intuition. A model, which I was able to follow, I did not "

Although his colleagues saw his jumping technique, but did not believe that this was better than the previous methods. There were sport scientific meetings, where goods were discussed that this technique of Dick Fosbury could not function. The jump looked not only very weird and strange, but was also somehow suicidal to dive head first on such a high obstacle. Reporters and journalists ridiculed Dick Fosbury only as a playful circus performers, who had chosen the wrong sport. But Dick Fosbury believed in his jump style and more began to perfect it.

1968 Dick Fosbury approached at the Olympic Games in Mexico at the age of 21 years. More than five years he had improved on their own idiosyncratic his high jump and wanted to now the competition dispute. While all the other athletes back as usual jumped over the bar, the spectators were amazed, as Dick Fosbury appeared to choose a different start. With a bow-like start he skipped effortlessly backwards the crossbar and presented as all the other athletes in the shade. When he then even sensationally won the gold medal with a height of 2.24 meters, it no longer held the audience in their seats. Over 70,000 enthusiastic people celebrated Dick Fosbury, because they were witnesses of a real milestone in athletics. While the competition could not believe it and the international community no longer came from the surprise out, Dick Fosbury was promoted to highly acclaimed star of these Olympic Games.

Dick Fosbury introduced himself with his idiosyncratic jumping technique against all the laws of the high jump. He was for many years only laughed at, mocked and a laughing-stock. But he trusted his inner feeling dazzled skeptics out and put his own limitations. So he made his surprising Olympic victory in the high jump for the greatest revolution in the history of athletics. His "Fosbury flop" changed the high jump technique forever and is bound to this day by all high jumpers.

Dick Fosbury: "It was without doubt my biggest sporting achievement"