Extraordinary will change your life

For hours watched Peter Edwards his young grandson to play. Although Harry could not walk, but he crawled on the living room floor tirelessly behind the ball, as if there were nothing more important in the world. When Harry learned to walk, already had some objects believe in it because Harry shot them down accidentally. The grandfather was still so proud of his grandson that matured a particular idea in him. He decided to go into a betting shop and bet that Harry one day national football team of Wales is. As Peter Edwards placed this bet with 50 pounds, Harry was just under 2 years old. The betting shop took the grandfather not serious, but represented a betting slip from a ratio of 2500 to 1. Peter Edwards believed in his plan, and protested the bill safely in a safe in addition to other important documents.

Peter Edwards: "He chased after the ball on his hands and knees before he could walk. This gave me the idea " 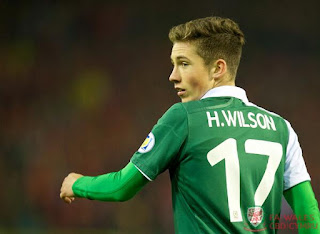 Peter Edwards told the little boy from his bet, as an incentive and as a sign of confidence. The grandfather was of the opinion that it made his grandson stronger if he knew that someone believed in him. As Harry took part for the first time in a child's training, we immediately felt his passion for soccer. At the age of 8 years, Harry snatched a place in the recognized youth department of the great Liverpool. The family of Harry took great pains in purchase to bring Harry by car to training and pick it up again. Even the grandfather took this long road trips like to be. He had the feeling of being on the right track and he felt were important love and trust for Harry.

Although Harry was a shy boy, but on the football field, he turned into a self-confident personality. While Harry trained diligently, the grandfather gathered his first newspaper article about his talented grandson. The boy became a very talented footballer and he was already at the age of 15 years his debut in the U-18 team of FC Liverpool. The dream of a great football career seemed to realize, when Harry actually received an invitation to the Welsh national football team more and more. The grandfather was about naturally informed immediately, because over the years developed a close bond with the grandson had developed.

On October 15, 2013, on a cold autumn evening, the World Cup qualifier against Wales Belgium took place. Peter Edwards pursued excited every second of this game, because it was really Harry, who was sitting on the bench, if only this had been a real sensation. There were only a few minutes to play, as the grandfather suddenly a cold shiver ran down his spine. He saw his grandson on the sidelines are, because the coach wanted to make a substitution after him. Within seconds, the grandfather witnessed one of the greatest moments of his life when he saw Harry was allowed to play for the national team of Wales. The dream of his grandfather had actually been fulfilled.

Harry Wilson was at the age of 16 years and 207 days the youngest Welsh national football team of all time. When he entered the turf, also the grandfather had won his bet and was now richer by 125,000 pounds, although it this was not so important.

Harry Wilson was. Not the bet his grandfather to a great football player This was due his extraordinary will and his willingness to subordinate everything to the football. But Harry could only develop these qualities, because he always felt the confidence and trust of his grandfather. With this strong tailwind he managed to defeat all fears and doubts and to build the necessary confidence to become a real football star.