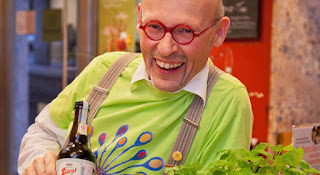 Johannes Gutmann was born in 1965 in Zwettl (Austria) and grew up together with four siblings on a rural farm on. The idyllic landscape of the Waldviertel in Lower Austria awakened in him at an early passion for nature and the countryside. After his graduation he began to study Business Studies, he had the goal to make at some point independently. After only two weeks, he broke this but again, because it deterred the usual theory and had nothing to do with his opinion of reality.

Johannes Gutmann: "It was so incredible. It was clear that the professors have everything they tell you not to make itself "

With a variety of jobs is he now tried to earn his living, but this is not been crowned with success and Johannes Gutmann was unemployed. One day he came in contact with herbs and specialty crops, which were planted in agriculture by the farmers while, but were ignored by the retail chains, and hence could not be sold. In the head of John Gutmann matured an idea to here might be able to fill a gap in the market. Now aged 23, he stood before the groundbreaking decision to either accept a disagreeable office job, or to follow his intuition. Contrary to all well-intentioned advice for a safe work he relied on his gut feeling for the market gap.

Johannes Gutmann: "It takes courageous people who also sell what is grown here,"

Spontaneously, he designed a logo with a sun and founded in 1988 with borrowed money the company "Sun Gate". Johannes Gutmann then visited the farmers in his home area around them to propose to market their herbal specialties directly under a common logo. Although it was thought his idea was crazy, but then farmers had nothing to lose. So it was that a young lad from the Waldviertel was standing on a busy farmers market to sell self-designed herbal Ackerl. While almost all young people turned their attention to computers and the Internet at the time, Johannes Gutmann believed in his unusual idea for regional dishes.

Johannes Gutmann: "I learned a lot at the farmers market, because I have spoken with the people. It's always about, to get people excited about something "

Johannes Gutmann recognized the tremendous development opportunity and he helped to market the organic products of the farmers properly. This unique regionality, he managed to build trust with consumers and sell goods first. He made representations even in large retail chains, but they were not interested in his herbal products. So Johannes Gutmann moved tirelessly from market to market, to further get his dream alive. Soon, more and more farmers enthusiastic for his idea, because by "Sun" got the herb farmers for the first time a genuine appreciation for their work.

Johannes Gutmann: "Soon I knew all but the spinner with the leather pants and the word of mouth made my little company known"

Johannes Gutmann remained true to his line and moved the company's headquarters rather than in a big city, but in a remote area and a small village with about 100 inhabitants. Because in the same area but were many farms, it was the perfect location for it. Johannes Gutmann was still struggling with many problems, it was reported by neighbors and the authorities advised him to disappear from the region. No one knew anything with the idiosyncratic entrepreneur to begin with his eclectic vision of the future. But Johannes Gutmann remained steadfast and did not listen to the skeptics, he was further convinced of his idea. Over time, organic products were becoming more fashionable, and the company of Johannes Gutmann started for the first time, slowly but steadily growing.

Johannes Gutmann: "You have to believe in his ideas"

By specializing in organic farming, the company "Sun Gate" now focused on the manufacture and marketing of herbs, teas and spices. A voluntary stringent controls guarantee that all products of nature have grown accordingly and were free from artificial additives. Many steps have been completed by the farmers still by hand and not by machine. Due to the fact that all employees were able to identify 100% with the firm of John Gutmann, all producers had joy in the work. This positive energy mixed with the good taste of natural ingredients was the foundation that "Sun Gate" with Johannes Gutmann lay an incredible success story.

"Sun Gate" was a million sales a real flagship company and we now exported products to over 50 countries worldwide. In addition, the company secured hundreds of jobs in a structurally weak region, which actually considered to be impossible. Although he was only laughed at his ideas, managed Johannes Gutmann alone, stand up to the powerful food industry and to overcome all difficulties. As a bonus, he opened with "Sun Gate" his philosophy and all the people were able to experience unique operating guides. Many children and parents have been fed back to nature in order to immerse yourself in the fragrant world of herbs and spices can. Johannes Gutmann changed by whole generations back to find back to their roots and to refrain from chemical and artificial foods.