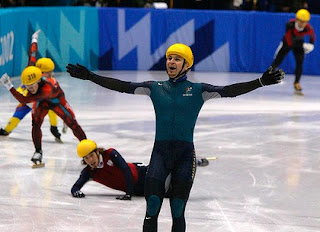 Steven Bradbury watched a great goal, he wanted to fulfill the dream of an Olympic medal necessarily as individual runners. While he was already celebrated some significant success in the team event, he remained in the individual competition, however, denied. In his first appearance at the Olympics in 1992 in Albertville (France) at the age of 18, he was only a reserve runner here. Two years later in 1994 in Lillehammer (Norway), he was already one of the favorites, but he left early from. After these unsuccessful play Steven Bradbury wanted to do everything possible in order to eventually win an Olympic medal can. Every day he trained like a man possessed and perfected a its course to improve his technique. He was in good physical condition, as a momentous accident happened.

In a race, there was a collision, he rushed there and was slashed by the sharp blade of his opponent in the thigh. The blood flowed immediately into streams, the downed Steven Bradbury just tried to fight against the loss of consciousness, because he was afraid might never wake up again. In emergency surgery, doctors saved the life of the athlete, who had already lost four liters of blood. His thigh muscle but was completely destroyed and demolished any muscle strands. The wound was stitched together with over 100 stitches troublesome again.

Steven Bradbury: "Fortunately, the medical care was perfect. Otherwise I would not have survived "

Steven Bradbury had to be a costly rehabilitation go through. For several weeks he could not burden his good physical condition was blown away his foot. With iron discipline he fought his way back, however, and built muscle by muscle through hard training again. With an incredible effort managed Steven Bradbury to 18 month period of suffering, way back again almost to its former strength and at the Olympics in 1998 in Nagano (Japan) to participate. Here he stayed but again without top spot since it due to his injury could not keep up with its competitors in physical terms. A short time later but was followed by the next heavy blow for Steven Bradbury.

After a collision with another runner Steven Bradbury came to fall and he crashed with full force headfirst into the boards. He broke his 4th and 5th cervical vertebrae and passed only with a lot of luck on the wheelchair. In order to stabilize his back he pins, screws and plates were inserted and the doctors gave him immediately the Council to end his sports career forever. But Steven Bradbury had a great strength of will and did not let it get too out of this serious injury. With an extraordinary fighting spirit he was able to bring his body again in the form. He performed a miracle, because he made it back to qualify in 2002 for the Winter Olympics in Salt Lake City (USA). It was perhaps his last chance at an Olympic medal.

As outsiders Steven Bradbury was however inferior its competitors clearly. In his quarter-final run he was actually excreted in third, but got no further because the runner was disqualified before him. In the semifinal, he was already in last place, as before him collapsed athlete and he could move in second with a lot of effort into the grand finale. In the final, Steven Bradbury were ever given no medal chances, and the experts seemed to be right. All four competitors were already far ahead of Steven Bradbury, who was far behind in last place. The very last lap was already dawned and Steven Bradbury did his best, but his rivals were just too strong and already far ahead. For brief moments, he still thought of his serious injuries, which had probably cost him an Olympic medal in his life.

In the last corner before the finish line, however, the unthinkable happened. A runner from the top flight came to stumble and tore all drivers include the trailing to the ground. Four runners were now on the ice, now was only a runner on his feet. Steven Bradbury roared up from behind, overtook the fallers and drove first across the finish line. The sensation was perfect, he had just fulfilled his dream and actually won the Olympic gold medal. He went down in history as the most surprising Olympic champion of all time and gained worldwide fame.

However, there were some critical voices about his gained with luck gold medal. But Steven Bradbury, she had truly deserves, because a long time had played him the fate of evil. He never gave up despite his serious injury, and although other runners had more talent than he, he never lost his positive attitude. Steven Bradbury was his great fighting spirit in Australia as a national hero and sparked a boom in winter sports from. He became a model for many athletes to always believe in yourself, even if the situation still seemed so hopeless.

To date, there are in Australia, the phrase "doing a Bradbury" ("a Bradbury make"). This is to mean never give up, and to prevail as the underdog against supposedly stronger.

Steven Bradbury: "I was not sure if I deserve gold at all. After a few minutes I realized I deserve it. Not for the 90 seconds of the final. But for 12 years on the way to this day "