It was about life and death

When they have given down the dressing and I saw my foot for the first time, I was close to tears. My lower leg was thicker than the thighs. I thought: He should in a boot? That will never, never again what! " 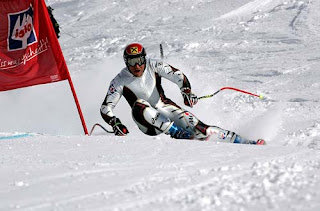 Hermann Maier is a former Austrian ski racer, whose story has become known throughout the world through various events. Hermann Maier was banished from the Flachau from the Austrian team squad (Austrian Ski Federation) because it was too small and too light for a top driver as 18-year-old boy. He suffered from an early age to stunting, which is why his talent hidden remained long.

Anyone else would have given up in this situation, but not Hermann Maier. First Hermann Maurer was a ski instructor and earned something. This job in the construction Hermann trained already at a certain level of force that would later help him very much. He went on his own account to FIS and European Cup races. Because the hard ermauerte money often was not enough for the night in a hotel, he drove with a discarded VW bus to the races.

Driven by his ambition, began for him on January 6, 1996, the first major breakthrough. On this day, he took part in a World Cup as a precursor giant slalom and fell to the fact that he had occupied twelfth place in the event of a vote. The total enthusiastic trainer were now aware of Hermann Maier and so he made his debut at the age of 23 years for the first time in the World Cup. Shortly thereafter, he won his first World Cup race and won as an emerging ski star soon after the first time the World Cup.

Its compete in the 1998 Olympics in Nagano, Japan made him all at once world famous. In downhill race he risked too much, sailed to a hilltop close to 50 meters horizontally through the air, rolled over several times, broke through the fence catch and landed outside the slopes in deep snow. The spectators were in shock. Nobody believed that these skiers the route could leave alive ever again. But Hermann Maier was almost unhurt again, Gold picked up two days later in the Super-G and shortly thereafter also gold in the giant slalom. By this century fall, as he is called again later, Hermann Maier was nicknamed "Herminator". The pictures went around the world this fall, and by the subsequent successes he became world famous.

Hermann Maier during his horror crash: "If I now win gold, I am immortal!"

In the coming years the "Herminator" dominated the World Cup almost at will, won a title after another. His hunger for success and his perseverance drove him to excel. Hermann Maier felt unbeatable, teemed with power and was in the prime of his career. Until that event in the summer of 2001, which should make the horror crash in Nagano in the shadows.

When Hermann Maier finished his physical training, he rode his motorcycle home. Shortly before his hometown it came from him through no fault to a serious accident. A car seized him, he flew 25 meters through the air, hit several times on the asphalt, and remained in the ditch are. In addition to numerous abrasions and bruises he retired to an open tibia fracture in his right leg.

Hermann Maier, "I'm lying there, have kept his foot in his hand. He has not looked there, where to look. The lower part of the leg is weggehangen that the jeans has a kink. I have seen it all: the bone, which would hold a, the foot which depends only on a few muscles. At that moment I thought: amputation! Then I looked, I lean back and rest profits. "

The doctors saved in an operation lasting several hours his leg, it was about life and death. The operation was a success and the threat of amputation was avoided. But the athletic career of a great athlete seemed to go on this day to end.

Hermann Maier: "When they have given down the dressing and I saw my foot for the first time, I was close to tears. My lower leg was thicker than the thighs. I thought: He should in a boot? That will never, never again what! "

Hermann Maier was emaciated from 94 to 77 kg, his body was completely weakened, after this operation, and the many medicines no wonder.

Hermann Maier: "My body has stopped working. He was dead. "

But the Herminator is a stand-up guy with an iron will. Once before in Nagano nobody had counted on him, and this time it should be so. A mortal would even months after such an accident with crutches go. But by his ambition, his desire to win and his unseemly consistent training, he managed the miracle - 144 days after the near-amputation, he was back on skis. He had his training plans ever pulled an iron, even if it took until late at night, and it paid off.

Hermann Maier, "You can never let you hang! I have looked and tried to get back on their feet always forward. Hatred and self-pity, I have replaced immediately. So I would have wasted valuable energy. "

Hermann Maier still celebrated numerous successes in his incredible career. He was often referred to as "alien", but it was his iron will, had brought him repeatedly to the front. Hermann Maier stated on 13 October 2009 as one of the most successful skier in history his retirement from professional sport. But his achievements, setbacks, comebacks and achievements will make it memorable forever!

Hermann Maier: "It resonates with a great sadness, I finish a career that I as a boy could not have imagined more beautiful to me."