Oliver Kahn is no longer in his goal. He whips his colleagues repeatedly forward. This incredible will now be transferred to the team and they want the game even necessarily rotate. 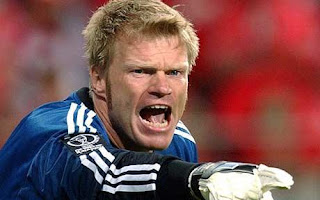 Oliver Kahn is a former German football goalkeeper who started his career at Karlsruher SC, the greater part of his career, he graduated but at Bayern Munich. His football career was paved by great successes, but also of defeats that made him mature human and athletic. Especially at the beginning of his career was much not according to plan:

1) At 15, he retired from the circuit selection Karlsruhe because he was too small and physically weak.

2) At 16, he was transported back to the B3-youth team of Karlsruher SV because it is a "Super Talent" was placed in front of the nose.

4) In his first Bundesliga match he conceded four goals, the match was 0: 4.

6) During the first year for Bayern Munich he suffered a cruciate ligament injury. (5 months break)

But driven by his enormous ambition he overcame all these obstacles, and became one of the world's best goalkeeper in football history. Its success will and his attitude are many of us still remember. Oliver Kahn has always been a frontier worker who left him partly disengage, but he has shown us that it does not always need the best to win, but often only the most obstinate. Following a story last Gameday of the German Bundesliga in the 2000/2001 season, which illustrates what you can achieve anything with will and an ungeheurigen hunger for success.

Hamburg, May 2001. The Bayern Munich played in Hamburg, a draw is enough for Bayern to win the German championship. The direct rival Schalke 04 plays at the same time at home against Unterhaching. Everything suggests that Schalke will win his last game, ie Bayern absolutely need this one point in Hamburg.

The final phase of the game is reached, it is 0: 0th At this time it is already clear that Schalke will win his game. An enormous pressure situation has built up, the slightest mistake can cost the championship that year. The last few minutes are already running, the Hamburger feel the nervousness of Bavaria and throw everything forward again. Only a few moments to win the German Cup for Bayern Munich.

A hamburger is made through on the left and crosses into the box. A perfect cross, Sergej Barbarez rises up, heads sharply and untenable for Oliver Kahn in the corner- goal! 1: 0 for Hamburg, viewers are over the moon. Last seconds, and Schalke 04's champion. The Bayern can be thunderstruck fall on the lawn. The absolute nightmare occurred - playful the German championship at the last minute. Only one man does not want to come to terms with this tragedy. As if stung by a tarantula runs Oliver Kahn to the referee, demanding to know the injury time. 4 minutes! His adrenaline spills over now, as if in a trance, he shakes awake his teammates. He wants success, and 4 minutes are still enough time to make the impossible possible. His teammates look at him puzzled, but she understood: It is not over yet!

Schalke 04 won its game, the fans already cheering the champion, you know the score in Hamburg.

Oliver Kahn is no longer in his goal. He whips his colleagues repeatedly forward. This incredible will now be transferred to the team and they want the game even necessarily rotate.

Suddenly an indirect free kick from 14 meters in front of the Hamburger Tor. The goalie has received a back pass from own player by hand. There is no longer any doubt, this is the last action of the game and the whole championship. The last chance to become German champions.

Almost all hamburgs stand on the goal line, there is not the slightest gap. The referee releases the ball. The ball is played across, the Bayern players Anderson shoots powerfully and with all his strength. As if by magic fetzt the ball past all the hamburgers and beats on the left below the corner. Goal! 1: 1, as the referee blows for this action. Bayern are German Champion 2001, incredible cheering scenes play off! At the same time horrified Schalke weep for the seemed to be sure the title. This League final will go down as one of the most exciting and most emotional in the story.

A huge contribution to this success had undoubtedly Oliver Kahn, who never gave up even after the late residue, although neither player had believed in the success. Oliver Kahn has never given up, not in this game, and not in his entire career. Maybe that's the secret of his success. Oliver Kahn ended 17 May 2008 his career, he won many important titles and received numerous awards for his achievements.