The incredible story of Cliff Young

The incredible story of Cliff Young was in 1983 actually happened in Australia. The ultramarathon from Sydney to Melbourne was one of the longest and most difficult running race in the world. 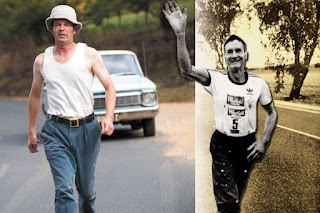 The incredible story of Cliff Young was in 1983 actually happened in Australia. The ultramarathon from Sydney to Melbourne was one of the longest and most difficult running race in the world. It was more than 875 kilometers and the race lasted an average of about 7-8 days. At this Marathon only world class athletes participated (mostly between 20 and 30 years) in part, the trained long and especially for this race. Supported by the largest sponsors of the world and the best sports doctors was filed at the perfect strategy to optimally divide the barrel. Running, massaging and about 5 hours of sleep were generally the rule, adhered to all experts also. Shortly before starting another photo should be shot with about 150 participants before the assembled world press. Suddenly a about twice as old man joined to the athletes to he wore work boots with galoshes and a strange jumpsuit. He was asked out of the way to go - but to everyone's surprise, he announced that he wanted to participate in the race. He had no teeth, he had taken out apparently for the race his dentures. His name was the 61-year-old Cliff Young.

Cliff Young: "Every year the participants run past at my farm and because I thought it would be great to go along sometimes."

The organizers were stunned and the racers were thinking of a PR stunt to attract attention. But Cliff Young was serious, he had taken it into his head to participate in the race. The old man was ridiculed, it was even planned to call a doctor because you worried about his health. But eventually they let him run with it with the assumption that he could not hold it long anyway. When asked about its strategy and its Board depots he was only flippant answer: "Am I here or what to run" When the race started, Cliff Young was with his heavy boots fast lot 100m back. The stadium reporter once said: "Here you see the dream of an old man, presumably his followers saw the last time." At the end of the day he had a few kilometers behind, and the experienced runners were massaging already and lay down for 5 hours to sleep.

When she took up the race again the next day came the big surprise. Cliff Young had gone up to one hour nap and had a considerable lead over all other participants. However, he was not taken very seriously anyway, we still thought that he would do soon anyway weak and this could never endure. Throughout the day, the boss also melted as expected until he was almost gone. The experts felt confirmed and the athletes went back to the usual ritual and short sleep. When she losliefen the next morning, but they had heard that Cliff Young had gone up to one hour nap again and again had a substantial lead. To connect to the words of the stadium announcer at the beginning of the race: Cliff Young has his followers actually not seen again. In 1983 he won the Ultra Marathon from Sydney to Melbourne in absolute record time of 5 Days 15 hours and 4 minutes.

Cliff Young became a national hero, he inspired by his cavalier way an entire nation. He defeated the best skiers in the world, whose oldest was barely half his age. All experts were aware of the fact much needed massage in between and around 5 hours of sleep per night in order not limp going. Cliff Young did not know this. He sat his own limitations and was not discouraged by the so-called experts. When he got the winner's prize of $ 10,000, he was surprised because he did not know that there was a price. And he distributed the first prize of the Ultra-Marathon runner on spontaneously to 5, who were not yet at the finish in handing over the check, because that would have it even tougher than many he himself, as he said later.

The phenomenon Cliff Young was naturally examined in more detail. It was learned that he tended sheep and was accustomed to just two or three days to run non-stop to hold the flock. Of course there was also a coach - it was his 81 years old mother. Cliff Young, a simple farmer on a sheep farm, it was all so-called experts, he went to this race as a legend in the marathon Running a.

We should take our Cliff Young as an example and not let it get out of the self-proclaimed Proverbs knockers and wiseacres. Everyone should stick to his goals to reach its limits itself!