A Story of The Scary Guy 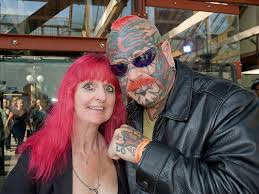 Earl Kenneth Kaufmann was born (USA) in Minneapolis on 29 December 1953, and successfully completed the compulsory education. In a later episode he earned his money with various odd jobs, among other things he was a singing teacher, photographer and computer retailers. At the age of 30 years he was a tattoo sting, which had already fascinated him as a child with his father. It quickly found pleasure in it and covered his body with many more tattoos and piercings. But this outward change should not remain without consequences.

Earl Kaufmann: "They thought I was a drug dealer, murderer - or at least for a madman"

The man threw him suspicious looks and crossed the street when they saw Earl Kaufmann. He was expelled not only from bars and restaurants through its appearance, but also his colleagues from work distanced themselves more and more from him. When he lost his job, Earl Kaufmann opened unceremoniously own tattoo shop. But the humiliations against him proceeded anyway. When he was still offended in a newspaper ad, he had enough of this incitement. After he had long employed with any thoughts of revenge, he came to the realization that he had to change his own attitude from scratch.

Earl Kaufmann: "I'm tired of that other criticize me because of my looks. It's my body "

Earl Kaufmann decided to no longer let in these negative attacks in itself. After derogatory and hurtful comments in turn produced only hatred and bitterness in him what he would no longer tolerate. He changed his whole attitude and cherished henceforth no more evil thoughts against any oppressor. He managed to break this negative cycle and to live a totally different life. He lay down the stage name "The Scary Guy" ("The scary guy") to and made the decision to stand up against prejudice and bullying in public.

Earl Kaufmann: "I respect all people, whether they are brown, yellow or buntgescheckt are like myself"

As "The Scary Guy" traveled Earl Kaufmann now as motivational speakers around the world in order to proclaim his message. He gave lectures at schools, universities and different companies, to appeal for love and acceptance in the world. "The Scary Guy" quickly became famous because of its unusual appearance, since about 85 percent of his body already covered with tattoos. With his message that every single person could make a difference in the world, he always had the full attention, because he himself was the living experiment for it. A scary and sensational man who fights despite its appearance for good in the world.

"The Scary Guy" single-handedly changed the world a better place. Although he himself was often exposed worst humiliations, he allowed himself to be beaten and never went forward courageously in order to show people a better way. For his fight for more tolerance, he was also nominated already for the Nobel Peace Prize.

Earl Kaufmann: "I want you to understand from today that the problem is an insult to the person who utters"