"Give up" the word did not know by Roland Zeh

Roland Zeh is just one of many hearing impaired people around the world. And just such people with disabilities are often placed obstacles in the way, even though they need our full support. The sensational career of Roland Zeh clearly shows what can be achieved with will and perseverance anything and one should stand tall in any case! 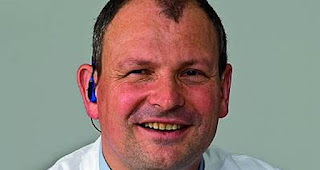 Roland Zeh comes as a normal and healthy baby into the world. He is a communicative and bright boy and comes with six years in the school. Nothing distinguishes it from others, other children. However, shortly after the start of school this condition should change very soon. Roland Zeh suddenly fell ill with a severe meningitis. A special antibiotic therapy it is half a year in a hospital, but when he can leave the hospital the age of seven, he's deaf by his illness and has almost completely lost his hearing.

Roland Zeh: "It might have been difficult, but it was not seen by me as a fraction."

Despite this handicap Roland Zeh grew up as a normal child. He participates in all activities, whether by bike or on skis. He speaks and reads normally his fellows from the lips from. His parents never gave him the feeling of being hampered, and so Roland Zeh graduated successfully from the school. But when he announced his career choice, he took care of astonished faces: Roland Zeh wanted to be a doctor. Many wrote it off then, a deaf doctor, such a thing could there be not yet. But there were some people who supported Roland, and so he began to study medicine.

Roland Zeh is despite the handicap an excellent and diligent student, he gets consistently good marks. Roland believed in his goal of one day becoming a successful doctor, and this goal he kept always in mind. After six years of successful student, he was close to his goal, as it as was called out of the blue that you can not allow to audit him as "not present the health conditions for the granting of the license to practice medicine." When Roland Zeh got over the initial shock he went to court to fight for his rights. He could, for example, although do not work directly in the operating room (by mouth protection he could no longer talks to lip-read), but there was an abundance of specialized facilities where hearing impaired doctors could make a career. But Roland Zeh lost at first instance. Was the dream of a successful doctor now over?

"Give up" the word did not know by Roland, again and again he had to overcome obstacles in his life. So he informed the press, mobilized the policy and went in the second instance. His fighting spirit and his enormous will should bring him success. He eventually got right and won the case. Roland Zeh made an amazing career and is now chief physician for ear, nose and throat medicine in Bad Nauheim (Germany). There he supervised, among other hard of hearing with their rehabilitation. Roland Zeh has to be aurally disabled intensive course talk to the patient and must always maintain eye contact in order to be able to lip-read, but not always, these circumstances of disadvantage, quite the contrary. This closer contact with the physician is very pleasant, because the patients constantly feel the doctor really interested in it.

Roland Zeh is just one of many hearing impaired people around the world. And just such people with disabilities are often placed obstacles in the way, even though they need our full support. The sensational career of Roland Zeh clearly shows what can be achieved with will and perseverance anything and one should stand tall in any case!

Roland Zeh: "For hard of hearing a leadership job is very stressful. But my career may perhaps show that it is still ".