Margarete Steiff: "The best for children only is good enough!" 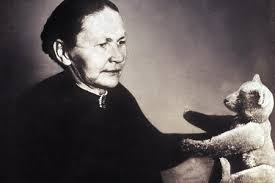 On July 24, 1847, born Margarete Steiff, the third of four children in the Swabian Giengen (Germany). At the age of one and a half years, she suddenly developed a high fever. She recovered from it very slowly and to the dismay of the family she retained permanent damage: Her legs could not move her right arm and barely. The devastating diagnosis was polio, a disease for which there was at that time practically no treatment.

Especially for parents this news was hard to take. You would never be able to go and would be tied to a wheelchair all her life. The time typical role of a housewife and mother, she would never be able to take, for those days, they had virtually no prospects for the future. But the little girl developed differently than many had thought possible. She felt that she had to accept the disease, to go their own way can.

Her childhood was of course far from easy. In a rumbling carts Margarete was pulled over a cobbled up to the school building. There they had to wait in all weathers, to a dwelling near woman passed to carry them up the stairs to the classroom. Despite these difficulties, she never lacked, bringing above-average performance in school. Through her cheerful and gregarious nature she was very popular and constantly shuffling people around them. Also, never to sit somewhere alone in the corner and getting actively involved in the life to.

Margaret's next wish is to be able to visit a sewing school was. The family was, however, on the other hand, they feared embarrassment and failures. However, through her strong will she prevailed and finally managed to get on the sewing school. Since the right hand could not use because of their illness, they had to turn around the sewing machine to work inconvenient from the rear of the machine. Although she needed much longer than all the other seamstresses, but over the years it has been a perfect seamstress. Something that no one had thought possible.

When she and her sister bought a sewing machine together - the first ever in Giengen - they opened a dressmaking. Margaret was very talented and the business has been a success. Soon after a Filzkonfektionsgeschäft from tailoring and was sold self-made garments, which came more and more into fashion. As Margaret in 1880 for fun a little stuffed elephant made of felt and wool seams, which should actually serve as a pincushion (!), They did not know that they should thus lay the foundation for a globally expanding stuffed animal company. The former toys consisted predominantly of hard materials such as wood or porcelain, and soft toy animals were something entirely new. Children especially love this cuddly and soft stuffed animals that they wanted to prefer never let go.

After a few years, a number of animals of felt already been offered. There was, for example, a bear with swivel head and moveable limbs with shoe button eyes. The famous Teddy Bear was born, which was called "Bärle" at the beginning. In tip 1907 presented 400 permanent employees together with 1,800 homeworkers already 974,000 bears forth. It was built a new factory building with a disabled access ramp, the hall consisted mainly of a lot of glass, which at that time was unique. Shortly afterwards a second glass building - they are still used by the company Steiff and are listed buildings.. To make the Steiff animals unmistakable, a button was sewn into the ear - the famous "Button in Ear" was born.

Margarete Steiff was a demanding but very warm employer and their employees was boss and friend at the same time. Until old age she oversaw the entire production and tested the finished stuffed animals. She sewed most patterns animals still used for self and only high quality materials. On 09.05.1909 Margarete Steiff died at the age of almost 62 years of complications from pneumonia. One for many people hopelessly appearing life became the example of what can be achieved with a lot of heart and will of all. The Steiff company will continue in their favor - until today.

Margarete Steiff: "The best for children only is good enough!"