Bobby Charlton: "I thought, why me? Why did not anything happen to me while all my friends were killed?" 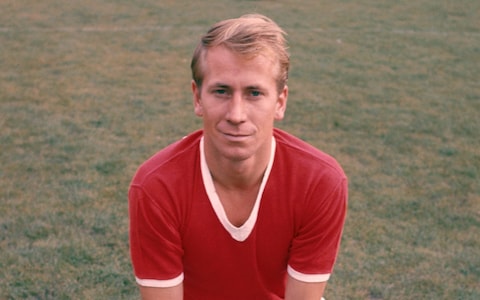 Manchester United (an England football team) was one of the best football teams in Europe in 1958. The team consisted mainly of young and talented players from the area or from their own offspring. The then coach Matt Busby formed a troupe, which was not only very successful, but also played a very attractive and awesome football. All England raved about this team, which was able to win in the previous years always superior to the English championship. One of the greatest talents in this crew was Bobby Charlton.

Manchester United was also successful in the European Cup and was considered one of the favorites in this event. In the quarterfinals managed thanks to Bobby Charlton, who contributed two goals, the rise against the former Yugoslav club Red Star Belgrade. On the return flight from Belgrade, you had to make a scheduled stopover in Munich to refuel the plane. In the plane was the entire football team of Manchester United, a few fans, journalists and accompanying personnel. There were already some problems and delays due to the winter weather, which caused a slight disturbance. The two players Tommy Taylor and David Pegg exchanged seats shortly before the start with Bobby Charlton and another player, as it was believed to have a safer place in the back of the plane.

The pilot steered the plane onto the runway and routinely accelerated. But suddenly the speed of the aircraft fell, due to the low speed, the aircraft could not take off. The plane then broke through the fence boundary at the end of the runway and crashed into a nearby house. As a result, the aircraft was torn apart, as a part encountered a garage, where gas was stored, followed by a huge explosion. Bobby Charlton was strapped with his entire seat thrown off the plane and became unconscious.

Bobby Charlton: "There was silence on board. When we broke through the fence, I could not even hear the sound of a scream"

Bobby Charlton survived this terrible accident with a laceration on his head and a severe shock. But when he asked about his teammates in the hospital, his heart started to bleed. Seven of his teammates were dead, as were the two players with whom Bobby Charlton had swapped places shortly before. Two weeks later, Duncan Edwards also succumbed to his severe injury, which was then considered a century-old talent in England. In total, the accident claimed 23 lives, including eight friends and teammates of Bobby Charlton. Two other teammates had to end their career after this disaster prematurely. Within moments, Manchester United's young and hopeful football team was torn apart forever.

Bobby Charlton: "I thought, why me? Why did not anything happen to me while all my friends were killed?"

The cause of the accident was the slush on the runway, which made the plane slower and unable to take off. Somehow, however, it had to continue for Manchester United, but the shock was still very deep. The season was played out with substitute and youth players, but the championship was lost, as you could not win most of the games, as expected. The recovered coach Matt Busby, who survived the accident badly injured, should now build a completely new team, together with the last great hope, Bobby Charlton. Bobby Charlton was only 20 years old at the time and now had to shoulder enormous responsibilities despite the tragic incident. He decided to continue playing football.

Bobby Charlton: "We were not allowed to give up. We owe it to our dead comrades"

After his extraordinary career, Bobby Charlton was knighted by the British Queen and from now on was allowed to call sir. Subsequently, he was inducted into the English Football Hall of Fame.

But Bobby Charlton never forgot his dead friends, who were killed in the plane crash. He honored her by continuing to fight under the most difficult conditions after this tragic incident and making an impressive career in football. His deceased comrades had never gotten this chance.

Bobby Charlton: "I feel guilty. I think about it every day of my life"