Anton Schmid - The sergeant with a good heart

Anton Schmid had no chance of a rescue. He was sentenced to death by the court martial for treason and rescuing the Jews and shot dead on 13 April 1942. He was thrown lonely and isolated on the edge of a cemetery in a pit and buried. 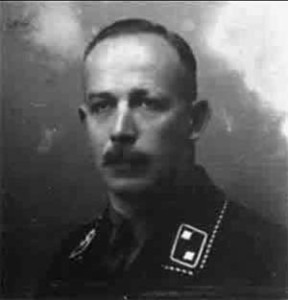 Anton Schmid was born on January 9, 1900 in Vienna (Austria) and learned to work as an electrician. He opened a small business with his wife, where he sold electrical equipment such as radios or even repaired things for his customers. After the annexation of Austria to the German Reich in 1938, there were initial tensions and conflicts with the Jewish population, but these were only precursors for later unimaginable mass murder. A short time later, the war broke out and Anton Schmid was drafted into the German Wehrmacht.

Anton Schmid was assigned as a sergeant to Vilnius (capital of Lithuania) and was there the head of the local sprinkle collection point. His task was to pick up scattered or cut off from their units of German soldiers again to allot them to new Wehrmacht units. Vilnius was originally considered a very liberal city and was therefore a Jewish stronghold with many Jewish residents. However, with the arrival of German troops in Lithuania, this situation changed abruptly, suddenly violence and terror prevailed in Vilnius with one priority: the systematic annihilation of the Jewish population.

There, where recently still Jewish people peacefully the streets animated, now found an incredible bloodshed instead. Terrified Jews were driven from their homes and executed in the street. Thousands lost their lives, the remaining Jewish population was relocated to newly built ghettos. From there, the Jews were systematically taken to Paneriai, a district of Vilnius. The forest of Paneriai used to be a popular destination for the urban population, but now there were mass executions. Terrible massacres took place there, because even women and children were ruthlessly and brutally shot. Anton Schmid got these unimaginable mass murders and decided to help the helpless Jews.

Anton Schmid: "I only acted as a human being"

The sergeant began sneaking into the ghetto at the risk of his life, bringing food to the starving people, which was prohibited under the death penalty at the time. He organized essential medicines or brought mothers bottle milk for their babies. Anton Schmid began using all possibilities of his office to help Jews. He issued an abundance of work permits to house Jews in workshops where he was in charge as workers to save them from the shootings. He bravely drove to the notorious central prison in Vilnius to liberate Jews who were held and tortured there and declare them his workers. Again and again he hid Jews at home, to protect them from the extermination actions or brought them with forged papers in the neighboring Belarus. But it was only a matter of time before the risky actions of Anton Schmid were inflated. Soon one found incriminating evidence and the courageous sergeant was arrested.

Anton Schmid had no chance of a rescue. He was sentenced to death by the court martial for treason and rescuing the Jews and shot dead on 13 April 1942. He was thrown lonely and isolated on the edge of a cemetery in a pit and buried.

More than 150,000 Jews lost their lives during the Second World War in Lithuania, which corresponded to about 90% of the Jewish population. In these cruel years Anton Schmid was the last ray of hope for many Jewish people. He single-handedly saved hundreds of Jews from certain death because he simply had a good heart. Only a few members of the German Wehrmacht had the courage to act like Anton Schmid. He could have lived a carefree life, but he chose the path of humanity and was punished for it with death.

Anton Schmid was awarded the honorary title "Righteous Among the Nations" in 1967 honored. His widow received the corresponding medal and a quote: "Whoever saves a human life has saved the entire world, as it were."

Anton Schmid: Everyone has to cringe. But if I can choose to die as a murderer or as a helper, then I choose death as a helper"