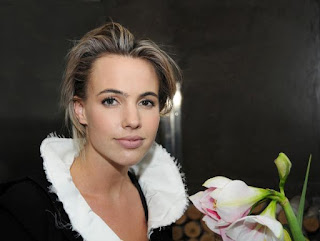 Sophie van der Stap was 21 years old and enjoyed life to the fullest. She studied political science, met with friends, went to parties and gladly began to travel. As they increasingly suffered from breathing difficulties and fatigue, they had to visit doctors to undergo an inspection. Soon followed the young student a shocking diagnosis, because it was a malignant form of muscle cancer ("rhabdomyosarcoma") found which had settled on her lungs. While for all friends of her life continued as before, Sophie van had a completely new way of life turn of Stap. So they are no longer concerned with the future, but she thought mainly to over death, over which she had shortly before made no thoughts.

The first days and weeks were the Stap difficult to survive for Sophie van. She felt an inner emptiness and cried every day to sleep. The young woman had to accept that she had cancer and that the possible death would now be a constant companion of her. Despite their desperation decided Sophie van der Stap, take up the fight against this insidious disease. Supported by her family and friends she drew new hope, but it should be an arduous and difficult road.

Sophie van der Stap, "The worst were the first few weeks. Every morning when I woke up, I experienced the nightmare again "

Sophie van der Stap had to let an exhausting chemotherapy and radiotherapy endure. The constant pain she brought to the brink of resilience, in addition, it was often at their new companion, an IV pole with which they strolled alone through the corridors of the hospital, bound. It was an enormous psychological burden for Sophie van der Stap, her emotions fluctuated constantly between fear and hope. But came to this inner turmoil are other features to the fore because they lost through the therapy her hair, her eyelashes and eyebrows. The cancer hit now with full force to the young woman who had to contend with sweating and constant fatigue. But Sophie van der Stap wanted not to be beaten by their illness and how most people retire, they went on the offensive and bought her first wig.

Sophie van der Stap, "The wigs helped with the disease anonymously in public to be"

With the wig, it was Sophie van der Stap much better. They could thus hide their disease and it was for them an essential pillar for a normal life. Soon she bought various wigs with different hair colors. Sophie van der Stap learned how they could best make-up. It was characterized by her eyebrows, eyeliner and used various other cover units in order to cover up their fatigue and her pale face can. Sophie van der Stap began to make-up differently with every wig and discovered that they could live from now on different personalities through the different wigs.

Sophie van der Stap: "For me it was a search as I could despite illness have fun in life"

Sophie van der Stap decided to give her wigs name, Pam, Daisy, Sue or Blondie. She changed her artificial headgear from now on with their mood, once she was with sexy wig and glamorous makeup on the go, another time she painted unobtrusively and was the normal girl next door. The various wigs strengthened the confidence of Sophie van der Stap, and gave her strength, she saw in the mirror a woman who was beautiful and attractive, and just as she felt then. She walked among the people, trying to live life as they had done before. For now, they had special friends by her side, on which they could fall back at any time.

Together with their wigs Sophie van had to survive the Stap many arduous and exhausting hospital stays, but with an extraordinary strength of will she managed to defeat the cancer. Despite her serious illness Sophie van beamed the Stap from an amazing zest for life and so was a role model for many people who never give up hope.

Sophie van der Stap wrote a book about their story and a film was made about them, which told of a fun-loving woman who went her own way in the fight against cancer and was successful.

Sophie van der Stap, "I wanted to show that living with cancer can be a good life. We must and can be happy anyway "