The Happiness of Daniel Kish 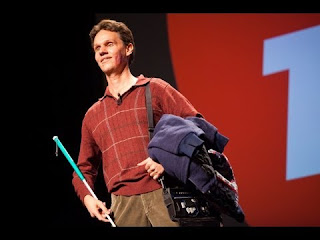 Daniel Kish was in the city of Montebello (California, USA) was born and lost within a few months by a tumor his eyesight. But his parents treated him more like a normal child and granted Daniel Kish many freedoms. He was often with his friends on the go or even many times alone, without any help. Already as a young boy developed Daniel Kish, a special character, to get around safely. He began to click your tongue to perceive things in its environment by back sound. He also managed to find suitable trees, where he climbed up with enthusiasm and could hear the branches and birds.

Daniel Kish: "When I clicked, I could hear things around"

Daniel Kish began this unusual technique to refine. Each time he clicked his tongue, things gave him an echo back, as if he could illuminate its surroundings at short notice with weak light flashes. Although Daniel Kish was without sight, but instead of eyes now took over the ears this feature. People could not believe it when she saw the blind Daniel Kish actually on a bicycle. But their doubts were soon dispelled because it passed no coarser accidents. Daniel Kish recognized by its Schnalzgeräusche problems any obstacles like parked cars, street lights and fire hydrants or curved as a matter of course through the side streets of his neighborhood. While many blind children withdrew under the protection of her parents, Daniel Kish went exactly the opposite way, and would not let his disability through their money.

As a blind student Daniel Kish began to study the possibilities of echolocation accurate. While many researchers questioned his research, Daniel Kish always believed in his project. In numerous experiments he could the unthinkable actually documented. Blind subjects managed to distinguish whether triangles, circles or squares were before them. Through minor delays until the sound came back again as an echo, you could very accurately determine the distance to things. Smaller objects have different frequency ranges as larger items and you could sometimes even determine the material. This method of tongue-clicking sound and the falling back echo was based on the bats. Bats can go hunting for insects in the dark without using his eyes. Simply emit ultrasonic waves that are reflected from objects as reflection again, thus optimum orientation is possible.

Daniel Kish: "It's not about to prove something, but about freedom. We do not want to be treated differently from the rest of the world "

Daniel Kish graduated successfully and became the first visually impaired mobility coach of USA. He began to teach echolocation blind people and to give lectures to present its experience to the public. Again and again he had to free himself from doubting parents who did not want to expose any danger to her child. But Daniel Kish sat down with his idiosyncratic technique by, he let his students to climb trees, organized various ball games and undertook thrilling bike rides.

Daniel Kish: "to run against a post is unpleasant, but may never run into a pole is a disaster"

In 2000, Daniel Kish founded the charitable organization "World Access For The Blind" in order to prove the whole world that the blind could make a lot more out of their lives than expected. Through this initiative, thousands of blind people have already been trained in echolocation and led to a new and unimaginable freedom.

Daniel Kish was always brave his way and freed unilaterally many blind people out of their isolation. In 2009, he was voted one of the 50 best visionaries by the US magazine "Utne Reader", which changed the world.

Daniel Kish: "What we do, requires no special gift. Most importantly, that one gains self-confidence and goes out into the world "