Bebe: "I have not forgotten the many nights when I had to sleep on the street" 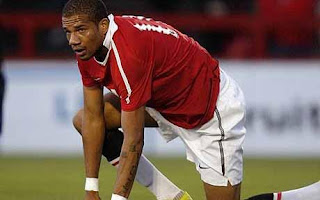 A ten year old boy with ripped clothes and emaciated body wandered alone and helpless through the streets of Loures, a suburb of Lisbon (Portugal). His parents, who from the Cape Verde Islands (West Coast Africa) had emigrated, had it simply exposed, alone and without any help. His back ached already from the many nights on the rock-hard road, his stomach growled, because he had taken for a long time no reasonable food, more to himself. In the bitter cold nights, he wrapped himself with the collected papers, to protect themselves a little from the cold. In the newspapers, the Portuguese football star Luis Figo was always displayed, and the boy wanted nothing more than to become a great football player once. And so he was able to escape his hopeless situation only through dreams, he dreamed of becoming a professional footballer and even playing for the biggest football clubs in the world. But he found it difficult to sink into sweet dreams, because the stench from the garbage cans, in addition to those he had to sleep every day was unbearable.

The first ray of hope arose when he was picked up from the street and he got a place at the orphanage Casa do Gaiato. From now on he got regular meals, no longer had to freeze in the cold, and got an education. But his great passion, he went to football ever - mostly on the road. In the worst areas of the city, he had to compete with other competitors over again, and so he developed in his own way. And so the years passed, and from the small, scrawny boy was a handsome young man. The fate took its course, as in April 2009 the head of the home, Father Arsenio, got a phone call.

On the line was the charity Cais, the player still looking for the Homeless World Cup. Participate only players allowed that were currently or formerly homeless. Of course, immediately fell a very specific name. And so the young man was allowed to travel to Bosnia and Herzegovina to take part in the competition. The tournament was a great success, as a striker, he scored no less than 40 goals in six games. Besides, he wowed the audience with a few tricks with the ball, which he had taught on the street itself. Because of his great talent, a Portuguese third division club became aware of him and the young man got his first contract. But this football club was almost bankrupt, and he got his measly salary irregularly. With the money he still supported the orphanage and friends on the street. But the interest of the Portuguese first division club Vitoria de Guimaraes was his great passion and his talent soon awakened, and the formerly homeless boy was bought by the club for scarce EUR 50,000 and he got his first real professional contract.

From now on, the soccer-loving young man was no longer tenable, with oversized motivation and incredible ambition he tried to fight their way into the first team. And he was actually successful. In seven preseason games for the season he scored no fewer than five goals. Suddenly even talent scouts took notice of the greatest football clubs in the world on the hitherto unknown footballers. Not only 16 months after the director of the orphanage had received the call that players have been sought for a Homeless World Cup, something incredible happened in the world of professional sports.

Manchester United, one of the biggest football clubs in the world, believed in the abilities of the player and bought the football talent out in August 2010 by his just signed contract with Vitoria de Guimaraes for incredible nine million euros and gave him a new five-year contract with a truly princely salary. The name of this young man is but Tiago Manuel Dias Correia called, he is only "Bebe". The sudden change has the 20-year-old Bebe very frightened, he cried for two days because the home he refused to give up his room. But now Bebe is a role model for countless young children all over the world who want to also fulfill the dream of a professional football player. Bebe has not placed his career in the cradle. He went his own way, played at Manchester United although he had played in his life in any single youth team.

Bebe: "I am overjoyed. I have not forgotten the many nights when I had to sleep on the street. When I look back on what has happened, then it sounds like the sports version of Cinderella. Ultimately, all the sacrifices were not in vain, but have paid off. I had to play a dream for a big club, and this dream has come true in fact "