The nails in the fence

The scars will bring them to hate you, but love,,, love will make everything looks beautiful and peace in our life. 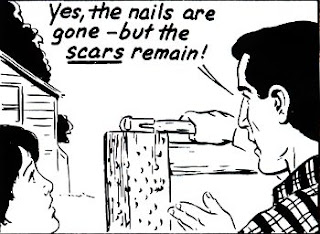 There was once a little boy who quickly became angry and freaked. His father gave him a hammer and a big pack full of nails. Every time you get angry again and disengages, you are going to this fence, and hit a nail into it. The boy agreed, even though he did not understand the meaning behind it.

One day it was finally so far that it no longer freaked. Quite proud he shared this with his father. The father took him by the hand and led him to the fence. From now on, we make it so. For every day that you do not disengage, you may drive a nail pull back from the fence. The boy agreed again.

Went by several days, until the boy went to his father and told him that now no more nails in the fence. The son was very happy. Together they went to the fence. The father said to him; I am very proud of you. You have done a great job. But you look at the many holes in the fence that have left the nails. The fence is no longer the nails right?

The boy agreed to his father. The father continued; Remember my son, if you say something angry to other people the next time. Your words could leave scars, have like these nails leave tracks in the fence. Even if you already apologize, it still remain the scars. You can easy hit the nails on it, but it won't easy to fix the scars in the fence, and if you can, it needs a long time but it still won't perfect. So my son, give the people love, and do not give them a scar. The scars will bring them to hate you, but love,,, love will make everything looks beautiful and peace in our life.