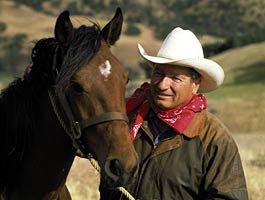 A lecturer told guests the following story: There was once a boy whose father was an itinerant horse trainer migratory, traveling from barn to barn and ranch to ranch to train to horses. So the education of his son was constantly interrupted. In the school his son was asked to write a paper about what he wanted to be and do when he was older. So the son wrote a long work, which described his goal of one day owning a ranch with many horses. He wrote in great detail about his dream and even drew a plan that showed all buildings and stables, as he drew the 400 square meter house, which should be on his dream ranch.

He hung his whole heart to the project and gave the job to his teacher. Two days later he was back, with a smooth 6 and with the remark, to report after hour at his teacher. The boy with the dream went to the hour to the teacher and asked, "Why did I get a 6" The teacher said: "This is an unrealistic dream for a boy like you. You have no money. You come from a migrant family. Owning a ranch will cost a lot of money. You have to buy land. There is no way that you could ever create. If you re-write this work with a realistic goal, I will reconsider the grade again. "

The boy went home and thought about it long after. Finally, after the boy had spent one week deciding he submitted the same work, without changing anything. He said to his teacher: "You can leave 6, and I can keep my dream."

Monty Roberts, so was the speaker, turned to the assembled group and said, "I tell you this story because you are sitting in my 400 square meter house in the middle of my 200 acre ranch I have this work still framed on my .. hanging fireplace The best part of the story is that my teacher was with a group of 30 children to camp here as the teacher was leaving, he said: "Look Monty, I'll tell you something now. I was something of a dream thief. I have many children stole the dreams During all these years. Fortunately you had enough gumption not to give up your. "

Monty Roberts was born on May 14, 1935 in Salinas, California. He grew up there under difficult circumstances, from his father, he was often beaten. Solace he found already in his childhood again in horses, of which he was always surrounded. His father turned to violent methods that were common at that time to the horses einzureiten what Monty but strictly refused from the beginning. So he developed over time his own, non-violent method ("Join-Up method") for dealing with horses. This should make it soon in the world famous. He was an official adviser to the Queen, where he trained horses at Windsor Castle. In Switzerland, he received an honorary doctorate from the University of Zurich awarded.

Monty Roberts realized his dream of an own ranch and a life with his beloved horses. Despite resistance from an early age, he believed in his talent and special skills with the handling of horses. He focused specifically on difficult and traumatized horses, this was a template for the film "The Horse Whisperer" in 1998 with Robert Redford.

Our dreams are ours, and no one has the right to steal other people, just as the teacher had tried at Monty Roberts. Monty Roberts was clever enough, and has to keep his dreams until now under huge success.