Walt Disney: "What you can dream, you can do" 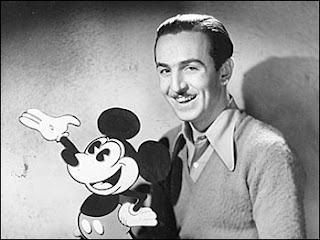 Walt Disney was born on 05/12/1901 in Chicago (USA). He had a difficult childhood, he and his brothers often based corporal by her own father, who had a very aggressive temperament. Soon his brothers ran away from home, this is coined Walt just like the poor of his father's whims. How many lonely children he took refuge in an imaginary world of illusion and consoled himself for hours to distinguished friends with paper and pencil. At age 16, he enlisted as a volunteer at the paramedics for the First World War. He began to draw cartoons to entertain his comrades. At that time he got there, the first thought that his hobby was more than a harmless and crazy avocation.

1928 appeared his career as a cartoonist but to take an abrupt end. He had naively ceded the rights to his first successful cartoon design ("Oswald the Lucky Rabbit") at his New York Film Distribution Office. Wals Disney was after this debacle left empty-handed. He was tricked and betrayed and he paid dearly bitter. But give up came in never in question and he took a vow: "Never again will I work for someone else." This attitude opened him new ways and Walt Disney knew how well to deny it.

Wald Disney put everything on one card, he sold his beloved sports cars and took on large loans. He dedicated a full orchestra for music recording. His next animated film had to succeed, or it was all over. For the first time as the world listened to the animated film dialogues, she heard the voice of Walt Disney himself, who spoke the role of a mouse. With "Mickey Mouse", he conquered the entire entertainment industry by storm. Micky quickly became a cult figure, and not just among children. The launch to world fame has now begun.

Walt Disney: "Mickey Mouse is the symbol of independence for me. In the emergency birth, the little guy solved our immediate problems. He provided us with the means to expand our company to its present size and the medium Cartoons to lead to new dimensions of entertainment. "

This was followed by new characters like Donald Duck, Goofy or Pluto. And Walt Disney dared something that previously was taboo in Hollywood - a cartoon full length feature film. With this idea he was spurned repeatedly, but Walt Disney believed in the success. And he actually managed - "Snow White" was an absolute blockbuster. It followed other movies like "Pinocchio," "Fantasia" and "Bambi". He created through his talent memorable characters and he became the leading head of a new corporate empire. He knew how to attract more and maximum commercial benefit from his characters. As apparently all existing sales opportunities were exhausted, he devised a new Disneyland.

Walt Disney: "I had a feeling that it would be such a thing as a kind of family park where parents could have fun together with their children."

Again he took a lot of risks and put his life savings in his project in Anaheim, a few kilometers south of Los Angeles. The visionary thinking Walt Disney had his colleagues in Hollywood far ahead. Although he had to audition more than 300 banks, to finally get to its desired funding, however, made this already paid very soon. He created the first giant amusement park in the world, all his imaginative creations came to this park before - the perfect illusion. Disneyland became famous worldwide in 1959 were five million visitors are counted - more than the Grand Canyon, Yellowstone and Yosemite National Park. When the Soviet Premier Khrushchev in the same year was in the United States to visit, he was very angry because of the planned visit to the Disneyland had to be canceled for safety reasons.

Walt Disney died on December 15, 1966 at the age of 65 from lung cancer. In nearly half a century, he created a unique empire, where he let his imagination run wild. In memory but remain not only his created creatures, but his will, his willingness to take risks and his belief in himself and his abilities.

Walt Disney: "What you can dream, you can do".