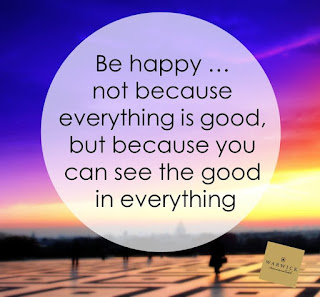 Once there was an unsuccessful sales representatives, which was more than satisfied with himself, his relationships and with his business. His wife wanted to divorce him and a huge mountain of debt weighing on his shoulders. He was despondent and had no hope in his life. When he pulled one evening stock of his past life, he decided to give up on the weekend, two days later to kill. After this decision, he looked calmly to the next and thus the last day of his life.

As his last day finally came, he was very relieved. Glad of the approaching end of his painful life, he enjoyed on that day alone his breakfast and even found love and praise for his wife. In a good mood, he said goodbye and even made a detour to old friends for whom he had no time for years. Here he had a lot of fun and it took several minutes to listen to the various problems.

On the way to his business, he was enjoying the warmth of the sun, by its downright happy facial expression, many people smiled at him, which he took very good note. In the work he cared most cordially to its customers. Without any pressure to sell his products, he enjoyed for the first time his job. He took into account the needs of its customers and presented the products for his honest opinion.

When he tried to cash in on the evening he said to the surprise that a huge profit had been made on that day. At home his wife received him like in the early days of his marriage, and served him with utmost attention his favorite food. At night, he realized that there actually was no longer any reason for his planned suicide.

The reason was very simple. He had changed his outlook on life and the life it had thanked him. So he decided, from now on every day as his "last day" to live on earth and became very happy.