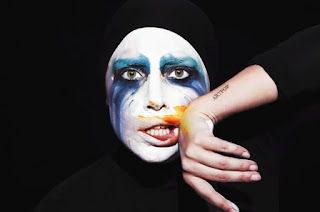 Stefani Joanne Angelina Germanotta (Artist Name: Lady Gaga) was born on 28 March 1986 in New York. Even as a child she began playing the piano, had vocal talent and wrote her own songs. Among the songs of Michael Jackson and Cindy Lauper, the stereo was always running at full speed, they danced and sang, as they just use microphone pretzel sticks. At the age of 14, she had first appearances in various New York clubs, her musical talent was indisputable. But it should follow difficult years that should enforce the talented girls strong.

In high school in Manhattan, she attended her Roman Catholic girls' school, which was attended among others by Paris and Nicky Hilton. There it was the rule to wear a uniform, but in her always came back to experiment on, she wore specially created outfits and fancy garments. Through this flamboyant style was only laughed at and ridiculed by most other students. It was not an easy time for them also because she had an outsider almost no friends. In spite of everything she had but a good student and the school closed successfully.

Lady Gaga: "I very often did not follow the rules. Therefore, my classmates made fun of me constantly "

At the age of 17 years Lady Gaga was among a group of only twenty applicants who have been approved by the renowned artist early school "Tisch School of Modern Arts" New York University. The parents were proud of her talented daughter, because among the graduates of these exclusive educational institution even Woody Allen, Alec Baldwin or Angelina Jolie. But again, they did not feel understood, they could not express their individuality and felt deprived of their freedom. And so they broke after only one year this surprisingly great training opportunity from and rented a cheap apartment in New York's East Village. She had no money, no ready-made training and no parental support more that were not at all agree with leaving school. She had only her talent, to which they still firmly believed.

To earn a living, they had to take on various jobs, including as a secretary or as a waitress. But again and again she moved to the stage to sing, she acted repeatedly performances in various clubs from. But she deserved this does not really have much money, and so she stepped in addition as a stripper in a gay bar. This freedom of movement they had no problem, because they had a very large body confidence. Your focused on the action and to the art that they wanted to represent for the spectators. Their performances were always fascinating, even by her charisma and her stage presence. This addition job she could continue enjoying their freedom and could evolve as an entertainer. She always wanted to be just on stage and entertain people, this was their vocation, and she believed it. They sang, danced, dressed still quirky and made it so, more and more people interested in various clubs of New York.

Lady Gaga: "There are born stars. Some do not have the certain something other. Anyway, I'm a star. During this time I found an artist to me "

At the age of 20 years, the record company "Interscope" was inspired by her numerous and extraordinary performances, pay attention to them and took them under contract. There she wrote and composed lyrics for "Pussycat Dolls" or Britney Spears. But her true calling was the stage, so it was the well-known music producer Akon, who took himself under contract and wanted to produce an album with her, because he believed in her musical talent. It should be followed by their first album "The Fame", which should mean her international breakthrough in the music business. This was followed by an incredible career move and she became famous for her strange and self-created stage outfits quickly around the world.

Lady Gaga has an important mission that they want to tell the people. She wants to help people to deal with the inequities in life. They even took years until they had overcome the consequences of years of bullying at school, their way out of the ridicule was the music. You want to tell the fans that it's not important to be like her friends, but it comes to be unique. With her style she sets an example against exclusion and gives people hope that they do not want to let things get.

Lady Gaga always went her own way of self-realization. Despite all the opposition and the mockery of the people they fought for their uniqueness. Whether back in school when she struck by extravagant clothes, or later as a stripper in which they could express their art. Today, with their music and their attitude role model for many people around the world.

Lady Gaga: "There are times in life when do you feel not like a winner, but that does not mean that you're not. With my music I want to create a special atmosphere for the fans, in an outsider can hang out and does not feel alone. I hope that people will say in 20 years: Lady Gaga has changed my life and gave me their music stop when I did not "