Joana Adesuwa R. ?? A fight against witch-hunting and voodoo

Children are persecuted cruelly as witches. They are tied up, beaten or etched with acid. These rituals are show and profiteering and often bring a so-called priests, several thousand Euro ? 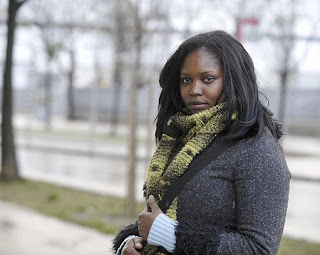 Joana Adesuwa Reiterer was born in 1981 in Nigeria (West Africa) and enjoyed a happy childhood, her father ran a gas station and was able to successfully feed the family well. In many parts of Nigeria, but we grew up with the knowledge that there were ghosts and witches and that it was powerful juju priests (voodoo priests) reserved to be able to distribute these witches forces. Joana thought not much about it, because she could never imagine ever coming into contact with it. As the business of the father to the gas station but worse ran, he sought the help of such a juju priest, which could make out the culprit immediately. Simply claiming that Joana would be a water goddess with magical powers and that she was responsible for the misfortunes of the father. Suddenly from an innocent girl was an outcast, that had to heal from an evil spell.

Joana was now at the mercy of strange rituals of Juju-priestess, she had, for example, for several days without food stand, she got here only to drink a foul-smelling fluid to drive away evil forces. Joana was disowned by her father further and pushed into the clutches of the sinister rituals of Juju-priestess until she could no longer bear the torture and fled to the nearest town at the age of 16 years. Without money and assistance they now slept in abject poverty under bridges and had to fight every day for survival. Within a short time she had come from a sheltered childhood in absolute hell.

Joana could not be by their circumstances but things get, they took various jobs and began to study the way. One day she met the living and charismatic in Vienna Nigerians Tony, with whom she soon moved to Austria and married him. After their difficult time she'd bargained for a better life, but it should come back everything is different. Her husband asked her as a sign of their love, that they should participate in a mysterious voodoo ritual in Nigeria to confirm love to him. Under great pressure, he forced Joana to participate in this seven-day ritual. Joana was drugged and witnessed this ceremony in a trance, there were goats and chickens slaughtered it and made strange statements, they had no chance to fight back somehow.

Joana Adesuwa R .: ?? "Blood flowed from the four chickens bodies, the men splashed me with it and whispered wishes and curses" ??

Deeply disturbed Joana returned to Vienna and soon she realized that in addition something was wrong with her husband. He had told her that he led a travel agency, but from the many young and anxious Nigerians, who were constantly in her small apartment, no mention had been. As Joana also found documents and passports, issued on behalf of which they knew sometimes, with the shots that did not fit this, she suddenly had to realize that her husband was a trafficker and pimp. Joana immediately packed her things and ran out into the night. As a picture of misery she sat crying on a park bench, she had no idea how her life should go on now, following its exclusion from her family, she was again left entirely to their own devices, moreover in a foreign country. It was only when a pedestrian gave her the phone number of a Viennese women's shelter, which cared for women like Joana, she found protection and a new sleeping place.

Joana fought on and, now took to make money various auxiliary works, and also learned the German language. Although she had no property, they tried to make a fresh start and to look positively into the future. Soon she landed better jobs and got their lives back together. But she was not thinking only of himself, but to the many people who also needed their help, and so she founded in 2006 the club ?? Exit ?? to combat human rights violations and trafficking in women, and this support was more than necessary.

Belief in spirits is widespread in African countries, especially in the poorer areas. Runs in life things go wrong, so someone must be found who is to blame, and these are always the most vulnerable in society, the women and the children. Juju priests who often cooperate with criminal traffickers who use this superstition and earn thus much money, at the expense of innocent people drive them supposedly evil spirits through painful rituals. And if the victim does not agree to the juju provisions or the bad luck does not turn into happiness, women and children are expelled, tortured or burnt alive, because it is believed that they are witches. Thousands of women and children are living in Africa on the road, because they have been sold as alleged witches. Help is available only in isolated witches villages where they can find refuge.

Joana Adesuwa R .: ?? "Children are persecuted cruelly as witches. They are tied up, beaten or etched with acid. These rituals are show and profiteering and often bring a so-called priests, several thousand Euro ?? "

The Nigerian Joana Adesuwa Reiterer fights today from Vienna, against this cruel ritual of exorcism, against the brutal witch-hunt against children and against trafficking in women, since many women in Africa are now enticed with false promises to come to Europe, where they are then forced into prostitution to order pay their debts. As one of the few people Joana has the courage to inform the public of the problem of human trafficking and the witch craze and to fight it. All over the world it considers shocking lectures on human rights violations and persecution of witches, reminiscent of barbarous states like the Middle Ages, but today actually happen that way.

Joana Adesuwa Reiterer are with their club ?? Exit ?? the fight against human rights violations, a public voice. Although she was the victim of Juju cult itself and terrible things had to endure, they are today many people courage and hope, to stand up against this ancient and abhorrent tradition to defend. For their commitment Joana got several awards, among others it was founded in 2008 by the Women ?? s Federation for World Peace, titled ?? Ambassador of Peace ?? (?? Ambassador of Peace ??) honored.

Joana Adesuwa R .: "?? It's not about me. The point is that a crime is happening in this world that must be made public ?? "