In Holland, he discovered a nearly 100 year old fishing boat, which is seaworthy and is financially viable. With his savings, he buys the launches and lets him adapt it for a rescue ship through donations 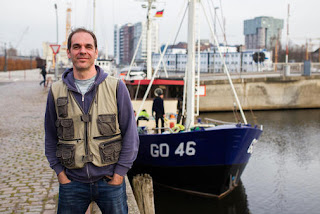 In 09 November 2014 there will be a day of remembrance for the 25-year-old Berlin Wall fell in Germany, Harald Höppner comes to ponder. He sees photos of East German citizens, who are successfully fled and are celebrated as heroes, as well as the West German smugglers. He compares the situation at that time with the current refugee situation in Africa, where many people coming across the Mediterranean to Europe and also hope for a better life. Harald Höppner decides to help, because no human being can choose his country of birth and where war and peace prevails. In treacherous Mediterranean, true death dramas from.

Harald Höppner begins on the Internet to do research, until he finally reached his goal. In Holland, he discovered a nearly 100 year old fishing boat, which is seaworthy and is financially viable. With his savings, he buys the launches and lets him adapt it for a rescue ship through donations. Harald Höppner calls his project "Sea Watch" and tries to advance his ideas through public relations. He writes several deputies in politics emails, which, however, all remain unheard. Harald Höppner it can not be beaten and is fighting for his plan to help the shipwrecked in the Mediterranean.

Harald Höppner: "The greatest tragedies still played out in the Mediterranean, there is hardly anyone engaged"

Getting volunteers register with Harald Höppner as captains, doctors, interpreters or mechanic. The small ship should absorb any refugees, but act as a floating emergency call center, which is closely cooperating with the Coast Guard. With lifejackets, liferafts and initial medical treatment Harald Hoeppner wants to protect the refugees against the often certain death. After a great effort has succeeded Harald Höppner. The rescue ship provides since 20 June 2015 Mediterranean serving.

Harald Höppner: "The question is, what would happen if in fact advised hundreds of people in need and we would not be? Even if there is only one person we save your life, the thing has been more than worth it "

The help of Harald Höppner is more than necessary because due to October 2014 ended an important operation of the Italian Navy to high costs. She was with several ships deployed to salvage people on the high seas. So you could save the life of one year more than 100,000 people. But now the refugees are put back on your own, you can not imagine what tragedies happen every day in the sea, without the public finds out about this itself.

Just an old fishing boat struggles through the stormy sea. It is the ship of Harald Höppner, which has created single-handedly despite critical voices a bold relief in life. He does not discuss the problems, but is without further ado. Many lives will thank him his bold courage. A real hero!

Harald Höppner: "People come in any case, no matter what our politicians decide. We must not drown people. Looking away is not an option "