Jump from the edge of space

Joe Kittinger trained hard for his projects and completed numerous tests in altitude and cold chambers. But already in his first test jump in a jump altitude of 23,300 meters a lot went wrong, because one of his parachutes did not open properly. 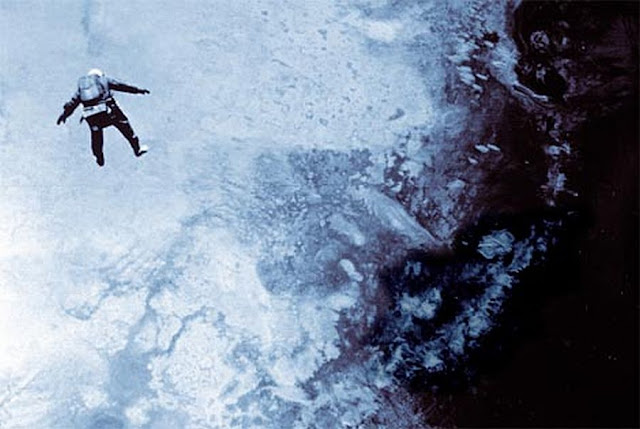 Joseph Kittinger was born in Florida on July 27, 1928, joined at the age of 20 years, the US Air Force, where he completed his pilot training. He was very talented and soon flew the latest combat aircraft of the US Air Force. Joe Kittinger was an absolute daredevil and volunteered for this reason soon as a volunteer to be available in dangerous experiments of the Air Force. And so he came to the project! Excelsior, where brave people were looking for, who were willing to risk their lives.

In 1960, the people had not yet conquered outer space and manned space flight was still far off. There were many open questions to be clarified, because it was not known what effect had great heights beyond 20,000 meters to humans and whether the cosmic radiation from outer space could harm the human body. In order to clarify these issues and to test new parachute systems in this gigantic heights, dedicated to Joe Kittinger, who was brave enough to put this high-risk projects. The Excelsior.. Project consisted of several skydives from heights 20-30 kilometers.

Joe Kittinger trained hard for his projects and completed numerous tests in altitude and cold chambers. But already in his first test jump in a jump altitude of 23,300 meters a lot went wrong, because one of his parachutes did not open properly. Joe Kittinger started so fast around its own axis to turn that he was unconscious. However, the main parachute opened automatically and it landed unharmed on Earth. While every other participant would be increased as a result of this life-threatening situation immediately from this project, Joe Kittinger remained. Few days later, he risked everything again in a test jump, and this time everything went according to plan. Now everything was ready for an absolute record jump from a height of about 30 kilometers and there was only one man who wanted to enter into this venture, Joe Kittinger.

On 16 August 1960 Joe Kittinger rose with a full of helium gas balloon in the air. At this time, no one knew if he would return to Earth alive again. Since you had chosen an open gondola, had to wear a special pressure suit Joe Kittinger from the start, with a more than 70 kg parachute system and special equipment for data records. However, at an altitude of about 13 kilometers, he noticed damage to the pressure suit on his right hand. Joe Kittinger now had to make a momentous decision, because the attempt would have been stopped immediately when a defective pressure suit. And Joe Kittinger made the incredible decision by the ground station to communicate anything, even though he knew that this could be his lack of obvious damage to health difficulties.

Joe Kittinger: "?? Against known threats you can prepare yourself. You worry about the things that you do not see coming. My hand swelled up, she was even about twice as large as normal, I could no longer use them "??

After about one and a half hours, the balloon reached the altitude of 31,333 meters and Joe Kittinger stood shortly before his jump. His right hand ached and he realized that there was no air pressure at this altitude and he could not survive without his protective suit. It was an impressive but hostile environment, where he was. A man Never before was in front of him at this level, and Joe Kittinger had now return to Earth. The tension and nervousness in the ground station were felt, no one knew how this jump would go out of this incredible height. Because Joe Kittinger had already boldly fall from the open gondola and sped up to 988 km / h on the earth.
photo

Joe Kittinger: "?? I had to constantly look at my stopwatch to gauge my level ability" ??

After four minutes and 36 seconds in free fall he had survived it and the main parachute opened as planned. The parachute system actually worked perfectly and Joe Kittinger landed a few minutes later back on Earth. His hand was sore after a few hours in order, it turned out later that the swollen hand sealed the damaged suit and had probably saved his life so.

The record jump of Joe Kittinger was a sensation and the whole world talked about this incredible parachute jump. In addition, he set several world records: The highest balloon flight with an open gondola, the parachute jump from the greatest height, the longest free fall of a man, and the highest speed of a man in free flight. Lots of valuable information about space and lots of useful tips about parachute jumps from a great height were collected. Joe Kittinger undertook in the years that followed, many more Ballooning for the Air Force and stood for the scientific community in order to gain new insights.

Space pioneer Joe Kittinger made it possible through his courageous actions that man could conquer space in a later episode. He jumped the first man ever from a height of over 30,000 meters, although one could not yet be estimated at this time, whether he would survive this reckless action.

Many years later, the idea of ​​skydives from a great height with the help of Joe Kittinger revived with a new project (Red Bull Stratos). On 14 October 2012, the Austrian Felix Baumgartner jumped with a parachute from a height of over 39,000 meters, breaking thus became the first man in free fall through the sound barrier. Pioneer of this incredible world record was but Joe Kittinger, who had made with his courage and fearlessness from the past, this project would not be possible.