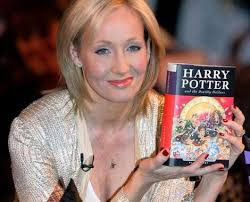 Joanne Rowling had very early felt the desire to become a writer. At the age of only five years, they already invented their own fantasy stories. Joanne Rowling was very shy, so she shared her stories with her younger sister. She had great fear that they tried to talk her out her passion. After finishing school, Joanne Rowling studied to meet the French language to her parents' wishes. Lucky it was not so, as she worked as a secretary for Amnesty International after successful completion. They constantly scribbled novel designs on meeting minutes and was in mind was elsewhere. In her heart she knew that she wanted to be a writer, this hope she had always had.

Joanne Rowling: "I always wanted to be a writer, even though I've told someone rarely. I was afraid that someone said it was hopelessly "

During a train journey to London she suddenly had the idea of ​​a skinny, black-haired boy, who did not know he was a wizard. The idea always assumed concrete form and there was a magical and mystical environment in her head. Because the train was late, Joanne Rowling was created about four hours a mysterious world of magicians and wizards. Although she could not write down their ideas, because they did not pin it and they do not even dare to ask a stranger for a pen, but you should keep it all in your head. The protagonist Harry Potter and his friends Ron and Hermione, the wizard school Hogwarts, the human Muggles, the villain Lord Voldemort and many other figures.

Joanne Rowling: "I have ever written this and that, but never had me an idea so fascinated"

Until their ideas but were implemented, they had to overcome many low points. In the middle of their already-growing manuscript of Harry Potter her mother died at the age of only 45 years from multiple sclerosis (disease of the central nervous system). The death of his mother helped that Harry Potter had to be an orphan, and the subject of death and loss should play a major role. It was a sad and very painful time and Joanne Rowling decided to go for a short time later at the age of 26 years to Portugal in order to gain a little distance. The records of Harry Potter took her with him and wanted the novel, finish addition to her work as a teacher there.

Joanne Rowling: "It was a terrible time after the death of my mother. My father, my sister and I were devastated. It felt as if pressing a concrete slab on my chest, the heart I felt literally hurt "

In Portugal they fell in love with a television journalist, married and became pregnant shortly thereafter. But the marriage failed after a few months and Joanne Rowling returned with her baby back to Britain, where she first moved in with her sister. Joanne Rowling was now in the classic poverty trap. Since they got no place in the state child care for her daughter, she had to take care of their child. Therefore, they also found no matching job and could also afford childminder. She lived on welfare and chatted with borrowed money from friends afloat. She felt humiliated and thus worthless, and yet she had a glimmer of hope: Harry Potter.

In every free minute she continued working on her book, which gave her in the difficult time of hope. While her daughter was asleep in the stroller, Joanne Rowling wrote the story of Harry Potter on notepads on, mostly at a cafe. In the evening she typed then beat the handwritten version on an old typewriter, a computer because they could not afford. And after tireless and hard work they had finally managed to finish the first volume "Harry Potter and the Sorcerer's Stone". They immediately sent it to several publishers, but no one wanted to publish her book because of the length and complexity. Only a year later took pity on the publisher Bloomsbury, but to publish her novel yet, due to the support from the YA Officer Barry Cunningham. For his 8-year-old daughter was so impressed by the book and Harry Potter that it had convinced him.

On 26 June 1997, "Harry Potter and the Sorcerer's Stone" was published with an initial print run of only 500 copies. The publisher told her but to work again, because as a writer of children's books could not live. However, it turned out differently, because now three days after the publication auctioned a US publisher, surprisingly, the American rights to the first work for whole $ 100,000. To pay this sum for a previously unknown children's author was a sensation. But this should be only the start of an incredible success story, because soon the whole world became aware of the book series. With the history of the unloved orphan boy Harry Potter, who rose suddenly to a dazzling world of wizards, witches and goblins, they met exactly the taste of children to adults. Other parts of the Harry Potter saga written by JK Rowling, and again there was record-editions around the world.

JK Rowling, the "K" she added itself and stands for Kathleen, the first name of her grandmother, managed by their perseverance and determination to bring the story of Harry Potter come to an end. They gave up hope on ever that they once would be eventually a famous writer, and did not let it get by various setbacks. She managed from welfare recipient to the most successful author in the world.

To date, her novels have been translated into more than 65 languages, more than 500 million copies have been sold worldwide. The story of Harry Potter was filmed and came with incredible success in theaters around the world. Joanne K. Rowling is currently regarded as one of the richest women in Britain. Today she uses her notoriety and campaigns for single mothers and donates large sums of money for the fight against multiple sclerosis, what her mother died.

Joanne Rowling: "The greatest moment in my life was when I learned that Harry Potter is published. It was a dream of my life to see a book written by me on the shelf of a bookstore "