In Cambodia, women have no right to say no 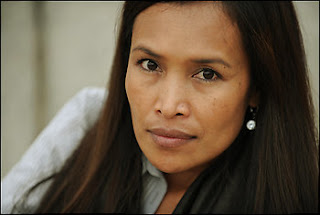 Somaly Mam was born in 1970 in Cambodia (country in Southeast Asia) and grew up in very modest circumstances. Cambodia, by a long civil war one of the poorest countries in the world, had much beauty to offer. Long sandy beaches, pristine islands, ancient cultural traditions and numerous temples were just some things that you could admire in Cambodia. But there was also a dark side of this country, and Somaly Mam made very early acquaintance with it. Already as a little girl she was sold like many other young women of her family to an old man who held her like a slave. She had to fetch water, washing clothes, for hours harvest rice and catch fish. It was an inhumane life, Somaly Mam has been abused and beaten, also from sexual assault could not fight back. But it should come much worse.

Somaly Mam: "In Cambodia, women have no right to say no. You have to sacrifice their lives "

At the age of 15, she was sold to a brothel, where she was forced into prostitution from now on. Somaly Mam tried to resist, but the will of her was soon broken, she was repeatedly raped and beaten repeatedly. Attempts to escape from her were unsuccessful, they were punished immediately and locked her in a small cage with snakes away. Young girls were mercilessly tortured if your customer refused, they were like animals chained or beaten with electric cables. The body of the child prostitutes were often so exhausted and bruised that they simply no longer able to offer their services. As punishment, they were shot.

Somaly Mam: "People laugh about prostitution, but I saw many horrible things"

Somaly Mam acquiesced to their fate, there was no escape for them in this cruel world. She had not even a place of refuge, where they would be able to stop. Multiple she wanted her young life an end, because to stand the constant torment, day and night reckless suitors available, were unbelievable. One day she met a Frenchman who fell in love with Somaly Mam. He helped her to escape from this hell and to flee to France. The years of rape, violence and humiliation were over now, but the mental anguish would stay forever. The private life had no meaning for Somaly Mam far, but now they had found a new meaning in their lives, because there had to be a reason why she had survived this terrible ordeal.

Somaly Mam founded at the age of 26 years the charity "AFESIP" who campaigned against child prostitution and to combat human trafficking in Asia. Your new organization grew rapidly and soon became known internationally. In different countries of the world offices were opened in order to allow women and children a normal life again, who had already fallen into prostitution.

But with "AFESIP" to Somaly Mam had created an almost unbeatable opponent, because the Sexmafia was powerful and everywhere to find. Somaly Mam but not intimidated, they grumbled publicly about politicians and influential personalities who were involved in corruption and prostitution. Somaly Mam has received death threats and could only be traveling with bodyguards. Its main facility in Cambodia are always protected the target of raids and had. But Somaly Mam was strong, she struggled to help you for their goal, helpless women and girls, despite the many attempts at intimidation.

Somaly Mam: "Every day, when I see the victims who have been raped, I have to fight with all my strength. And I never stop "

Through the dedicated struggle of Somaly Mam thousands of girls were already exempt from forced prostitution. But there was an almost hopeless use because of sex tourism flourished and Somaly Mam had to additionally enforce against corrupt policemen and officials. Although the police had known where children were forced into prostitution, they did nothing. Somaly Mam had to bribe with money so they only became active at all the police. And often helped clear evidence anything because corrupt judges sabotaged again the Enlightenment and guilty persons were simply acquitted again.

Somaly Mam was awarded for her humanitarian work and her tireless fight numerous awards. She was honored by the Spanish Crown and wore at the opening ceremony of the 2006 Olympic Games in Italy the Olympic flag. In 2009, she chose Time magazine among the 100 most influential people of the year.

Somaly Mam got out the deepest hell, in which they had been trapped as a young girl, rising again. Through its international educational work they made people point out that still happened terrible things in their country. Somaly Mam was the first woman in Cambodia, the public dared to fight against child prostitution, human trafficking and corruption. Despite death threats, she wrote on her story and brought out an incredible book that shocked many people around the world.

Somaly Mam: "The little girl in the center are happy. They are the best in my life. The youngest is three years old. She was also sexually abused "