The brutal Evin prison in Iran

Evin has changed me forever. I should have died at Evin, but I survived. Why? To the whole world to tell my story so that she learns of all the Terrible, what happened there! 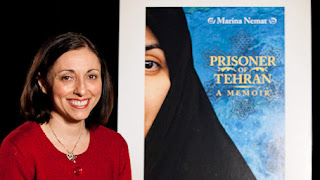 Marina Nemat was born on 22 April 1965 in Tehran, the capital of Iran. She grew up in a Christian family, a true tolerated in Iran religious minority in a dominant Shiite or Shia religion, but still with a lot of disadvantages. Briefly, Shiite religion is looks like Islam, but they are actually different. Marina Nemat was proud of her faith, and this should be their undoing. As in school instead of mathematics suddenly politics was taught to influence students politically, they did not want to simply accept that. She shared her opinion of the teacher with that they should continue to teach math, but this only reacted angrily and sent them out of the classroom. But suddenly her followed the other students, who were also not in agreement with this teaching. So she became unintentionally the leader of this strike, and in a student newspaper published them add their opinion. This incident was not unnoticed by other people.

Marina Nemat was just in the bathroom when the doorbell rang unexpectedly at the front door. She immediately had a bad feeling, because it was to be expected, no visit. As already armed Iranian soldiers were in the apartment in order to take them. Parents stood the terror in his face, when they heard where to bring up her daughter because it was the notorious Evin prison in Tehran. All men shunned this prison as best they could, photographs of the building were strictly forbidden from inside and outside. Again and again were heard terrible things out of this prison, who inspired the people eerie fear. This place was tantamount to cruelty, torture and death. Parents could no longer protect her child, and so Marina Nemat came as a young girl at the age of only 16 years in the seedy jail. The carefree childhood should henceforth be over.

Marina Nemat was already in the midst of the torture prison when suddenly the silence of anguished cries were torn in their environment. This was followed by blows with loud bang, interrupted only by desperate cries for help of a victim. Under terrible fear she came shortly thereafter herself for questioning. With brutal beating against her soles wanted to achieve that Marina Nemat accomplices called who supported them in the school newspaper, as the public opinion against the government was undesirable. But Marina Nemat was a brave girl despite her young age and said nothing. The punches were harder and torture always gruesome, never in her life she had to endure such bad pain. And soon she lost consciousness due to the incredible pain.

Marina Nemat was bound with some other occupants on a pole. The firing squad already brought their guns in position. You should now be shot, just like that, and Marina Nemat had terrible panic before death. Suddenly she was untied and taken away, however, the remaining victims were a few seconds later the last shots of her life listening. She was lucky, because a prison guard had fallen in love with the young girl and managed that their death sentences commuted to life imprisonment. This prison guards extorted Marina Nemat Now to convert to Shiite to marry him, because otherwise her family and relatives would suffer in the future. She had no choice and gave after the threat, she converted to Shiite and unwittingly married a man she did not love in order to protect their loved ones.

Time passed and the life in prison was marked by violence, rape, torture and humiliation. Often you had to sleep on the floor because there was in the cells of acute shortage of space. Marina Nemat as experienced as the other inmates absolute hell, the only support in this difficult time, she found in her childhood memories and their own beliefs.

When her husband was killed by a death squad, since he probably tolerant dealt with the prisoners, it was the family that had extensive contacts in order to achieve a reprieve for Marina Nemat. After more than two years in this hell prison, she was finally able to leave this terrible place as a free person and was after a long time to return home to her family. All other with their prisoners were not so lucky, because no one could again leave the prison alive.

Upon their return, no one asked about her ordeal. The family was terrified before the terror regime and everyone thought only that they should simply forget their past. Marina Nemat therefore repressed the experience as best he could, although of course it was hard for her. It took over 20 years before they should seek their terrible memories about the Evin prison again. She wrote down her experiences and published a book about it, entitled: I do not ask for my life. She broke her silence, because until now no victim had ever found the courage to talk about the experiences in this prison. With its history, it turned out so boldly against the terrorist regime in Iran.

Marina Nemat has left Iran because they would there fear for their lives because of their public opinion. She now lives with her husband and their children in Canada, where they can live in freedom. The contact with her family she has completely stopped in order not to endanger them. The Evin prison has not changed to this day, always penetrate cruel stories of torture and executions to the public. Many innocent people are there still in prison, and by the majority is you never get back to hear something.

Marina Nemat: "Evin has changed me forever. I should have died at Evin, but I survived. Why? To the whole world to tell my story so that she learns of all the Terrible, what happened there!"