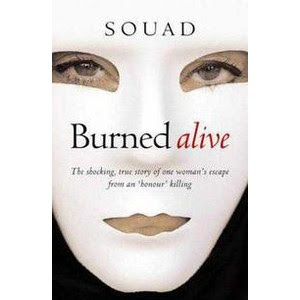 Souad grew in the West Bank, an occupied area of ​​mostly Israel, as the daughter of a simple farmer. How many settlements prevailed in their village a strict and traditional value system, where a woman had no rights. Also Souad already had to learn as a little girl, to subordinate everything to the man. With her sisters she toiled all day on the field, while her brother glorified and was allowed to visit the school. When her authoritarian father came home, she had to take off his shoes and washed his feet. Although she did everything for her father, she was often beaten up by him with a stick, because men were allowed to exercise violence against women, even without any reasons.

Souad lived like a slave, her life was marked by hard work, from serving and from constant subjection. Often she had also fear of death, because for every little offense there was a hard punishment. She was once tied next to the cattle in the barn to a post and watched as her father slaughtered a sheep beside her. Souad believed that he wanted to cut her the throat, he would have had it not even to be feared as a man a severe punishment. As illiterate and without education they had no hope of a better life. Until that day, when she fell in love with a young man from the neighborhood.

They met secretly with the man. Souad believed in marrying him, so they could be saved from the enslavement of her father. Some time later, Souad was at the age of 17 years, sexually totally unenlightened, pregnant, she confided to her lover and then a speedy marriage. However, this Souad used only cowardly fled from the village to go to the trouble of Souad's father out of the way. This flight would probably mean the death sentence of Souad. As an unmarried woman to be pregnant meant shame on the family brought to have. Souad was terribly afraid, because in a society where already enough a quick look at a strange man to cause a major scandal, she was now pregnant and asked completely on your own. When she could no longer hide her pregnancy before the family, she was immediately put under house arrest. The family, consisting of only the men of the house, quickly precipitated a ruthless decision to this Shame of whitewash the family again.

Souad was doing the laundry in the yard when her brother is sneaking up behind her. Suddenly he poured petrol over them and set fire to Souad who immediately began to burn brightly. The burning alive Souad screamed in pain and fell to panic over the garden wall. Coincidentally saw two women Souad and flapped their veils upon her to put out the fire. The downed young woman was taken to a nearby hospital, where they washed her clothes and remains of the charred pieces of skin from the body. Then you left them alone again their fate, because in a so-called "family affair" did not want to interfere. The room smelled of burned flesh and the wounds began to fester, Souad suffered incredible torments unaided and without any painkillers. One day she visited the mother in the hospital, as a gift she had brought a poisonous liquid, to end the disgrace to her family permanently. At the last moment, however, a doctor intervened and chased the mother.

There was a woman on Souad attentive, who worked for a humanitarian foundation. You took care of Souad and was planning a rescue mission for the young woman. The father of Souad was agreed in tough talks that could lay Souad in a distant hospital and gave the power to dispose of Souad. In return, you had but to promise parents that you will never see her daughter again in the village, so that the family could tell that she had died. Thus, the family honor was saved again in the village.

Souad and her newborn child were flown to Europe. After many operations in a special clinic the physical deformities by severe burns were so good it was fixed, but the body of Souad was disfigured forever. She suffered for years from depression and had to constantly overcome nervous breakdowns. But slowly, she struggled back to life and managed to finish with its terrible past. She married a loving husband and still had two more daughters.

After many years Souad found the courage to tell the world public from their trauma and wrote a book that became a bestseller immediately. She described in her incredible experiences in her past and the nearly successful honor killing her. She wore her story to the public in order to show the world what cruel things many women are still done today. In their public appearances they need at any time put on a mask and their place of residence she keeps secret, because it is still in great danger. Since her flight from the West Bank, it has indeed no contact with her family more, but if this Souad recognize, would immediately try a family member to murder Souad.

Every year, about 5,000 women and girls are killed because of these honor killings. Many women live in constant fear and must always expect the worst. Because the shame ever has to answer the woman, even if it is completely innocent.