Ellen von Unwerth: "You have to want to take a risk " 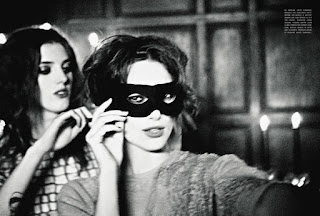 Ellen von Unwerth in 1954 was born in Frankfurt am Main (Germany). Her childhood was marked by the early loss of her parents and a life between orphanages and foster parents. In this difficult time it often took refuge in storybooks and crept into fantasy worlds. She dreamed of one day to work in a circus, where they could let their creativity run wild. At school she was constantly by her extravagant reveries problems, yet they mastered their school. At the age of 16 years Ellen von Unwerth finally moved to Munich, where they found shelter in a community (community) and took various odd jobs.

Ellen von Unwerth was now trying to realize her childhood dream big and landed a job at the famous Circus Roncalli. In this fantasy world, they felt comfortable, they worked here as a number Girl and a clown's assistant. She loved the shows and acrobats, which attracted the audience in its spell in the shortest time. When she during a odd jobs at a photo shoot of the large German youth magazine "Bravo" participated one day, many people were excited about their enormous charisma. Among them was the head of the famous model agency "Elite", which Ellen von Unwerth immediately took under contract and they formed a model. Soon she has already received important modeling jobs, Ellen von Unwerth now concentrated on her career as a model, since they could to protect themselves financially.

Ellen von Unwerth went to a real superstar in this industry and was internationally one of the most sought-after supermodels. Although it has been very successful, she found no real fulfillment in this work. They constantly had to hold in strict discipline and was not allowed to move in accordance with the camera. These often very strict conditions the photographer made her hard to create, she felt great frustration and inner emptiness. Ellen von Unwerth wanted to show their joy of life, to produce exaggerated and thus produce exceptional photos. By this view, it often was friction with renowned photographers as she wanted to realize their ideas in the photo shoots.

Ellen von Unwerth: "I always wanted to make nonsense and have fun"

During a fashion campaign in Kenya (Africa), Ellen von Unwerth borrowed spontaneously from a camera by a photographer and began to take pictures of Kenyan children on site. These recordings were so extraordinary that they were actually published by a major fashion magazine. In her now matured to the firm resolve, even to become a photographer, because it was able to put all their imagination here, as they always wanted to. Although she never had the appropriate training for photography, she brought up all the basics for self. She used her contacts as a model and thus received its first orders. She had a good nose for talent and chose one day a young girl from that fascinated her immediately. Through these photographs, they gave not only Claudia Schiffer breakthrough, but she also brought her career as a photographer rolling.

Ellen von Unwerth used intensively their experience which they could collect his time in the circus and later as a model. In her photo shoots they created fantasy worlds, where they combined pleasure with seductive eroticism. Strict Posen now belonged to the past, they moved the insouciance and the liveliness of its photo models in the foreground. With its loose attitude they also differed from most photographers. They always tried to spread with great wit cheerful mood on the set, so that all employees feel welcome. The models it thanked her with fantastic pictures which arrived well all over the world. With this style, she went her own way and thus rose to become one of the most famous photographer in the world. To their clientele already belonged international top models like Kate Moss, Naomi Campbell and Eva Herzigova. Even international stars like Madonna, Rihanna or Britney Spears could be already photographed enthusiastically of her.

Ellen von Unwerth had a special gift for creativity and imagination. But your secret to success was to believe in those skills and put them into a variety of forms. The former showgirl from the circus was so in photography her great determination.

Ellen von Unwerth: "Abandon yourself to your personality. You have to be brave, you have to want to take a risk "