Narayanan Krishnan - The savior of the poor

Narayanan Krishnan: "From the moment I knew: This is what I want to do all my life: to feed the poorest of the poor" 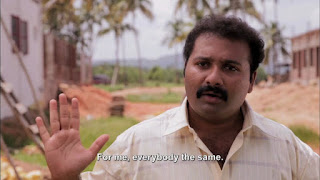 Narayanan Krishnan is 5-star chef in India and earned good money. He has such great talent that he even an offer from Switzerland gets to gain international experience. In India be elevated living standard but is not self-evident what Narayanan Krishnan is feeling soon. For he makes an observation that will change his life forever.

Under a bridge he sees an old man, thin and emaciated to the ribs. Suddenly he noticed that the man eats his own feces in order not to starve. Narayanan Krishnan is shocked and paralyzed with fear, never in his life he has had to witness such a thing. He immediately supplied the needy and buys him food. Narayanan Krishnan will not forget this moment, when the old man grateful holds his hand and sees him frankly in the eye. It is this moment that changed his life forever.

Narayanan Krishnan: "From the moment I knew: This is what I want to do all my life: to feed the poorest of the poor"

That same week he announces despite opposition of parents his well-paid job and is based in the same breath the charity "Akshaya Trust". He sold all his belongings and asks friends and family for help in order to buy food. From the Indian authorities it receives no support and the people from the upper class to drop it, because you do not write with the "mob". But Narayanan Krishnan does not give up and fight on undeterred.

Narayanan Krishnan: "We are all one, I'm just a human being. For me all are equal "

He distributed food supplies sick, cuts hair and massaged weak legs. Narayanan Krishnan converses with the poor and listening to their stories. It gives them a sense of recognition and gives them back their dignity. Around the clock collects Narayanan Krishnan donate and soon found people who support him in his vision.

A man can not change the world? Narayanan Krishnan smiles about it. Million meals distributed in recent years, and thousands of people have been made happy. A single man makes by his unconditional love for people the world a better place. Though Narayanan Krishnan throws away his career and also is a poor man, he is the happiest person in the world. Because he has always listened to his heart and his feelings. From the CNN it is for voted among the world's Top Ten Heroes of 2010.

Narayanan Krishnan: "I get this energy from people. The pleasure they get is the energy. I see the soul. I want to save my people "