Raju - The elephant who was crying when he was liberated

Raju began to cry and tears ran down from his face. For the animal rights activists it was confirmation that the elephant realized the liberation action. It was hard to imagine what the elephant would have been through in half a century. 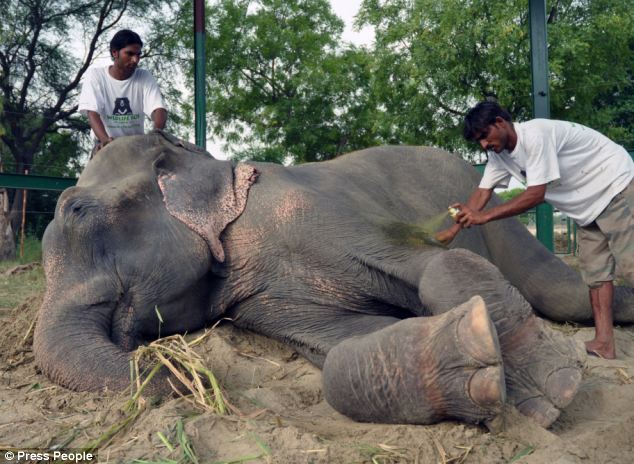 Elephant in India related to the god Ganesha. So, as a sacred animal, and represents power and wisdom. The pachyderm lives mainly in the wilderness and also get very much appreciated in India. Although the elephant enjoys a very high status in the society, animal cruelties are always present. Raju was already taken as a small elephant baby and had to make a very early acquaintance with the captivity. The elephant's will was broken with hard strokes and extreme brutality to make him submissive.

The changing owners of Raju treated this beautiful animal was not really good. In his captivity he was often beaten and imprisoned in a confined space. So the years went by, and Raju was now owned by a man who often abused the elephant. Chained to sharp nail chains, Raju had to withstand incredible pain, the tips cut into the delicate elephant skin and caused deep wounds on the feet, which were not treated. The pachyderm had to feed on the waste of tourists, which is why his stomach was filled with plastic and paper. His keeper earned money from Raju, because as a holy elephant, he would be able to bless the people for payment. In addition, he tore the elephant's hair from his tail to sell it as a lucky charm.

After more than 50 years in captivity full of hunger and pain, an animal welfare organization drew attention to the fate of the elephant who wanted to free Raju. After the court permission had been obtained, the animal rights activists pushed forward to the elephant to save him from his torment. As they freed the legs from the heavy chains, the elephant did not resist. Raju felt instinctively that now his misery would be over forever. The animal protectionists could hardly believe it, because when they opened the last chains, the elephant suddenly showed a surprising emotional excitement.

Raju began to cry and tears ran down from his face. For the animal rights activists it was confirmation that the elephant realized the liberation action. It was hard to imagine what the elephant would have been through in half a century. The animal rights activists were also very touched by this emotional moment and immediately provided the painful wounds of the elephant. For Raju, a new life began in freedom, which had been denied him for more than 50 years.

Elephants are highly intelligent animals and for many researchers it is proven that the pachyderms can mourn. The images of Raju and his tears went around the world and changed the opinion of many people that animals could actually show feelings. After Raju's long history of suffering, this was hardly surprising.