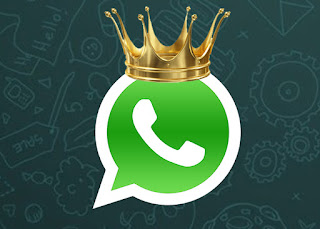 Jan Koum was born on 24 February 1976 in Ukraine. Near the capital, Kiev, he grew up under the poorest conditions in the modest home, there were, for example, no running hot water. After the collapse of the Soviet Union, Ukraine found itself in a severe economic crisis. There was not a good prospect for the future in the country, the mother moved with the 16-year-old Jan Koum in the USA. The father, however, remained in the Ukraine.

In the town of Montain View, California, she now wanted to build a new and especially better life. The emigrants, however, had to fight hard in the new country in order to somehow get by. His mother worked as a babysitter, Jan Koum earned extra money by scrubbing the floor in a grocery store. The family was also dependent on social assistance and had food aid by the authorities claim not to suffer from hunger. At school had Jan Koum difficult to integrate. In high school, he was an outsider and kept falling on a troublemaker. But he soon discovered his great passion, because he was fascinated by computers and computing systems.

Rather than going out with friends, he browsed in his spare time prefers in manuals for computer networks. He devoured many books on the subject and increased his knowledge about it without any prior knowledge. Jan Koum brought additionally all programming even when he had an extraordinary technical knowledge. Although he quickly developed real expertise in this industry was, he missed his friends and his father in the Ukraine. In his homeland, he had almost no contact since the calls abroad were simply too expensive. When his father died in 1997 in Ukraine, Jan Koum was devastated. Again and again he wondered why there was no inexpensive options which would have allowed better communication with his father.

Jan Koum attended after high school is a public university, however, which he left after a short time. Through his technical talent, he managed to grab a place at the big Internet company "Yahoo". Life seemed now to develop in a positive direction when the next heavy blow should arrive. As Jan Koum was 24 years old, his mother died of cancer. His only bright spot during this difficult time was his workmate Brian Acton, with whom he spent a lot of time at "Yahoo". They understood each other so well that they founded a commune and were best friends. After several years together on "Yahoo" but they left the Internet firm, as they were very underutilized and frustrated by the working conditions.

One day, Jan Koum bought a new mobile phone which was already aligned very strongly to Internet programs. Immediately, he was fascinated by the many applications that could use the Internet in addition. Since he had the idea of ​​an entirely new business model, which should enable the exchange of messages over the phone, through the Internet. Together with his friend Brian Acton he sat now everything on one card, and founded on the day of his birthday, February 24, 2009, the company "WhatsApp". But the programming step slow. Constantly crashed the application software and repeatedly appeared unforeseen problems. But Jan Koum had already learned in his life to fight and was not discouraged by the setbacks. As "WhatsApp" finally stood up secure legs, first came to the public in contact with this new intelligence service.

Without a specific advertising strategy, "WhatsApp" became a real sensation. Only by word of mouth, this communication method spread rapidly and the number of users rose from day to day. Jan Koum had recognized an important trend, because he sat mainly on mobile phones and smartphones with Internet applications. In addition, he was not only to make a fast buck, but he wanted to make the perfect communication between people. It further applications have been created, you could now not only send text messages, but also exchange photos and video files for example. Since you only need an Internet connection for it to "WhatsApp" like wildfire around the world.

Jan Koum initiated with "WhatsApp" an international communications revolution. Jan Koum and Brian Acton needed a few years to make it look with its simple communication application industry giants like Apple or Facebook age. Jan Koum made his biggest drawback to its biggest gain. For years, he lacked a suitable means of communication in order to communicate with his homeland, Ukraine, conveniently can. With "WhatsApp" He solved this problem on its own and grew the way from welfare to multiple millionaire.

Jan Koum: "It feels great to reach someone immediately at the end of the world on a device that can be taken anywhere"