Jackie Robinson: "All I want is that they treat me like a human being " 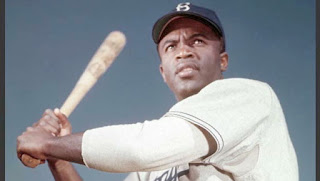 Jackie Robinson was born on 31 January 1919, the state of Georgia (USA). When his father left the family, the mother moved with him and his siblings to Pasadena (city in California, USA). Even in his youth he had to sit against baseless hostility and insults to defend, he and his siblings were constantly humiliated because of their dark skin color. Jackie Robinson did not let that deter you, he attended the University of California at Los Angeles, where he was very active in sports, and answered later volunteered for the US Army. Despite negative stance he managed to be included in the officers' school and was able to successfully complete his education there. Jackie Robinson was a very proud and sincere man, but the racial segregation and the gap between white and black people was very low at this time, what it should be difficult soon.

During his military service he was asked by the bus driver to take the back of the bus square, there had to sit where all the colored. Jackie Robinson, but consistently refused to go back. He was therefore brought before a military court for insubordination. He was acquitted again, but left after this incident, the army and devoted himself henceforth his favorite sport, baseball. He was allowed to play only here but in the unterklassigen Negro American League consisted exclusively of black players whose teams. Because in the US Major League Baseball, on the top and best league of the United States, were due to the racial segregation only whites play. Jackie Robinson had actually already resigned, despite his enormous talent never be able to be a true baseball star when he suddenly received an unusual call.

It was the president of the US baseball team the "Brooklyn Dodgers," Branch Rickey. Branch Rickey had an incredible plan, because he wanted to Jackie Robinson committed despite his dark skin for his team. At that time there was between the operators of the league and the clubs a verbal agreement that we wanted to integrate any Black in the league. Branch Rickey therefore worked secretly on the obligation of Jackie Robinson, not even his closest confidants, he told of his daring plan. He was the racial segregation has always been a thorn in the eye, but with this opinion, he was at this time in the minority. Jackie Robinson now had to make a difficult decision, because he knew that would come upon him much hatred. But despite his reservations, he met a brave decision and signed a contract to switch to the "Brooklyn Dodgers" to. Jackie Robinson wanted to bring its benefits to people on his side, but he had not been aware of the boundless contempt and humiliation he had to endure in the near future.

Jackie Robinson wrote sports history when he ran aground the first black player in a team of Major League Baseball on April 15, 1947. From the majority of the audience, he was immediately ridiculed and mocked by nastiest swearwords, because baseball should remain only a sport for white men. He was pelted with objects and constantly booed not only by opposing fans but also by their own fans. But the worst thing for him was that even their own team turned against him, and no word spoke to him. In addition, the players threatened to strike, which was however prevented by the board of the association immediately. Jackie Robinson was the total outsiders, the whole situation could not get any worse actually. But it became even more critical.

Jackie Robinson: "I'm not concerned whether they like me or not. All I want is that they treat me like a human being "

Jackie Robinson injured his foot when someone placed him secretly from his own team a sharp razor blade in his shoe. An opposing player deliberately jumped with the leg extended to him and yanked him to his leg, the referee undertook nothing against this terrible challenge. For away games the hotels he denied housing because he had a black skin color. The Ku Klux Klan, which had mainly black oppression goal took the game of "Brooklyn Dodgers" to public protest marches, all directed against Jackie Robinson. He received death threats, not only to him but also to his family. Jackie Robinson was trying somehow to stay calm, trying more to convince the people of his athletic talent.

Over time, the brave Jackie Robinson received initial support from his team-mates, who simply admired the courage and perseverance of him. They began to talk to him and get to know him as a man. Jackie Robinson, who was constantly under pressure, this gave confidence and he decided, despite the constant hate speech against him, further endure. And over time, something happened that he had never thought possible. The voices of pessimists against him were less and the stages, however, always full. Many Colored took hour-long rides in buying, just to play Jackie Robinson to see and support it. The newspapers wrote more and more of his outstanding achievements in the field rather than to humiliate him publicly. The insults against Jackie Robinson subsided and the atmosphere in the stadiums changed completely for the better.

Jackie Robinson was the season 1947 "Rookie of the Year Award" of Major League Baseball, which has been awarded annually to the best player who played his first full year in the professional league. In the following years he completed a successful career as a baseball player, he was respected from now on each of the opposing team.

When Jackie Robinson was inducted into the Baseball Hall of Fame in 1962, the most important athletes of the country were present. He was the first black man to receive this honor. After his career, Jackie Robinson put forth for the rights of blacks.

Jackie Robinson died on 24 October 1972 after a long illness. He stood alone against a society where blacks were constantly suppressed. Through his courage and his perseverance, he opened the doors for blacks in the baseball league and thus became a symbol of racial integration in sport and an entire American society. His jersey number 42 was frozen in his honor, no player in Major League Baseball will ever again wear a jersey with the number 42 back. Only one day a year, on April 15, the players are allowed to wear this legendary number, the number is thus for a day active again. It was on the very day on April 15, 1947 where Jackie Robinson was the first black baseball player his debut.