The first olympic champion of the marathon at all 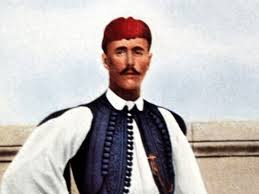 In 1896 the first Olympic Games of modern times took place, the venue was Athens (Greece). Shortly before the start of these Games came during excavations in Marathon graves of fallen Greeks to light. They remembered back to the Battle of Marathon and the legend of Pheidippides, who had run nearly 40 kilometers to Athens to proclaim the message of the victory over the Persians. Wanted this legendary race is now revive and so the first organized marathon was introduced as a competition. This marathon was to be the highlight in these Olympic Games.

Spyridon Louis was a simple farmer and was a professional water carrier. When he had to do as a young man his military service, were longer distances that he had to travel, no problem. As Sociable he was used to long to be on his feet and had therefore built up a solid basic fitness. So Spyridon Louis participated in a preliminary run for the Olympics and made this such a good character that he was one of the thirteen Greek runners who were allowed to participate in the marathon run. But favorites were the foreign runners who were all experienced middle-distance runner.

On April 10, 1896, the runners were taken by carriage to her start to Marathon. In the early afternoon was the race that led over 40 kilometers to Athens, started in the greatest heat. The audience expected at their home race a Greek victory, but the foreign runners were expected to be at the forefront of the field. They ran an insane pace, but they should not underestimate the length of the track. After about 30 km of the leading French and runner-Americans had to give up because they had run too high a speed. Now led an Australian who was only a few kilometers before the finish. However, this the relentless Greek heat tribute had to pay, and retired from the race, as he suffered a dizzy spell. Eagerly waiting for the audience now to the next runner, and when he showed up, broke out of cheering and applause.

It was the Sociable Spyridon Louis, who always ran a steady pace and had so hung the other competitors. Totally focused on his goal he got along well with the sweltering heat and took over this important race lead. The news of the possible Greek victory was already advanced into the Olympic Stadium of Athens, where you already curious staring at the stadium entrance. And suddenly appeared Spyridon Louis on. With powerful steps he ran into the stadium, as if he could still travel a much longer distance. He had now only to a run, and the atmosphere had reached its peak. Hats were flung into the air and deafening cheers chants were sung. After exactly two hours and 58 minutes, the sensation was perfect, Spyridon Louis, the water carrier, actually won this legendary marathon.

Shortly afterwards, Spyridon Louis pulled back from the public and was again active as a water carrier. Although he never again participated in an official race after this Olympic title, he became a national hero in Greece and many sports facilities were named after him.

Spyridon Louis had no special training for this marathon. But through his work as a water carrier, he was accustomed to travel long distances at a great heat, and this advantage he could use for themselves to beat the favored foreigners. He also relied on his endurance and his patience, because he knew that this marathon just anyone could win, who had the greatest willpower.

Spyridon Louis died on 26 March 1940 at the age of 67 years. He went down in history as a simple water-carrier, who managed to become the first Olympic champion of the marathon at all.