Because we were such a powerful team

John Jensen: "It was extremely difficult to play against us, because we were such a powerful team" 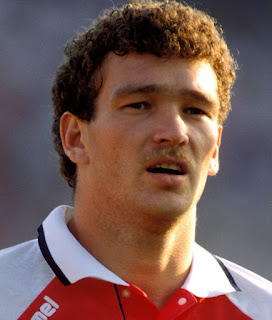 The European Football Championship from 10 to 26 June 1992 was held in Sweden. Unique tournament favorite was the German national team, which had won two years earlier, the World Cup. Were also among the favorites along with France and the Netherlands. Shortly before the start of this European Championship Yugoslavia was excluded due to the Balkan conflict and civil war, and so had to spontaneously jump in Denmark who had actually already been eliminated in the qualification. Immediately there was hectic at the Football Association in Denmark, because until the tournament there were just ten days.

The coach Richard Moller-Nielsen, who just wanted to build a new kitchen in his house, drumming with numerous calls so fast it went up his players, but this was not so easy. Many of them were already in the summer or were on vacation. Preparation for such an important football tournament no longer took place, it was just time for a few workouts. Of the journalists, the Danes were ridiculed because of this only as "EM-tourists", in recent years they had not also been successful. At the last European Championship in 1988 Denmark lost all games in the preliminary round for the 1990 World Cup in Italy could not qualify.

Coach Richard Moller-Nielsen: "I wanted to build a new kitchen, but then we had to play in Sweden"

So we went with little pressure in the tournament, you just did not want to embarrass themselves. In the first game against England they reached a goalless draw, which was considered by the Danish players already a great success, because it was believed actually to lose every game. This was followed by a narrow defeat against Sweden, now we played against the big favorites from France to direct the semi-finals. The French team was packed with international stars such as Eric Cantona, Didier Deschamps and Laurent Blanc, the Danish national team had, however, to answer back but their fighting spirit. The Danes ran and fought like lions, and the surprise actually succeeded. Denmark stunned all the experts, as it favored the Frenchman with a 2: 1 threw out of the tournament.

John Jensen: "We do not were under pressure. We were totally relaxed, have gone out and played "

The team of Denmark was a well-oiled unit, since many players already knew from his youth, and with the rise came to the semifinals even self-confidence to do so. They knew that they may not be the world's best players in their ranks had, but this was offset by battle and irrepressible will again. While the other teams doggedly trained their tactics and complied strictly in their training plans, it went with the Danes in general to light-hearted. In the training breaks they went on trips and also went once in a McDonald's restaurant, the coach understood it perfectly, to improve the atmosphere in the team. And this looseness should pay off in the next game, because in a true crime is defeated in the semifinals sensational the Netherlands on penalties. Stars like Frank Rijkaard, Ruud Gullit and Marco van Basten could not believe it, they were just resigned to an insignificant Danish national who had fought selflessly for their victory.

Flemming Povlsen: "Our big advantage was that we knew each other very well. What we have then made off the field, has brought us a lot of strength. We were on the coast, in Copenhagen, the mini-golf. We were like little boys that you had to keep only in a good mood "

In the final, were the outsiders from Denmark but now related to the tournament favorites from Germany. For the media, the tournament winner was clear already, it only dealt with the margin of victory. Stars such as Andreas Brehme, Stefan Effenberg or Jürgen Klinsmann should be a guarantee that Germany should become European champions. The Germans advanced with a huge coaching staff, several massage therapists and two medical professors. Each player had to adhere to a special diet, there was nothing left to chance. Thus disciplined the German national team, was so inspiring and carefree stepped on the Danish national team. They had nothing to lose, and with their looseness and passion played the Danes a finale that remained unforgotten to this day.

John Jensen: "It was extremely difficult to play against us, because we were such a powerful team"

Denmark fought with a giant running and an incredible commitment to the supremacy of Germany, who had not expected such resistance. The Germans had, despite the numerous stars in their own ranks no chance against this incredible will to win, Denmark won this memorable final with 2: 0th

The sensation was actually perfect. A team that nachrückte only as a substitute for the disqualified team Yugoslav team showed all the so-called favorites on their borders. Denmark did not have the best players in their ranks, and they could not prepare specifically for this tournament. But they were by far the strongest-willed team and played with a passion that showed no other team even close. And these were the main features of a Danish team, who had to cancel their holidays to make in the short term on the way to win the first European title at all for their country.