There was all not so easy

Fanny Blankers-Koen: "In a department store I discovered very nice plus cheap towels. They need to know at that time after the war there was all not so easy. So I stood at " 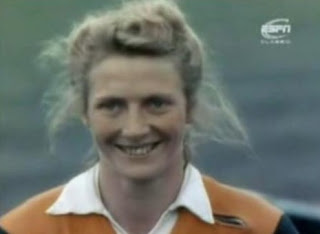 Fanny Blankers-Koen was born on April 26, 1918 in the vicinity of Amsterdam (Netherlands), and grew up on a farm. At an early age her father was amazed again and again about his talented daughter, who was very physically gifted and her brothers made clear in this regard in the shadows. And so she sent her then physical education teachers to athletics, where Fanny Blankers-Koen was very successful soon.

At the age of 18 years she took part in her first Olympic Games. Although they did not win any medals, but still achieved very good rankings. In the following years it was very quiet around the talented runner because due to the World War, the Olympic Games were canceled twice in a row. Fanny Blankers-Koen married in the meantime their coach and had two children with him. She was now a housewife and mother, although she tried passing her great passion to pursue. With success, because 1946 she won two gold medals in the 80 meter hurdles and the 4x100-meter relay at the European Championships.

As Fanny Blankers-Koen announced to participate in the 1948 Olympic Games in London, began terrible hostility against them. In that time it bordered for many people to neglect, if not mothers around the clock for their children were there. You got a lot of angry letters from people who did not understand it that mothers despite child also pursued their own interests. Fanny Blankers-Koen was exposed to a generally ranged smear campaign against him, a journalist even called in an article that they should renounce their Olympic participation and should instead take care of her family, after all, she was with her 30 years already too old to to succeed. Fanny Blankers-Koen met these accusations seriously, because people did not see that she was a very good mother despite the sport and the children were most of the time with her. But she had a strong will and wanted to show it to all so-called know-alls.

Since they no babysitter could afford their two children were in a pub always. While they ran their laps and diligently trained, the children played in the long jump pit, which consisted of sand. Fanny Blankers-Koen was supported constantly by her husband and coach who was always by her side. When she traveled all the 1948 Olympic Games in London, she was indeed in good shape, but was still ridiculed because she was already a mother of two and also not the youngest. No one believed that a simple housewife with two children could be successful, but Fanny Blankers-Koen spurred this just all the more because she wanted to prove people wrong.

The London Olympics should be the absolute highlight of her career. The housewife and mother it was all the critics and won in three competitions the gold medal (100 meters, 200 meters, 80 meter hurdles). In the final competition, the season finale (4x100-meter), they came almost too late, as they had discovered in a department store cheap towels for her family. And so they stood in the queue, even though all were waiting for them.

Fanny Blankers-Koen: "In a department store I discovered very nice plus cheap towels. They need to know at that time after the war there was all not so easy. So I stood at "

Only at the last moment they managed still to start, but the Dutch squadron was soon far behind. But the scorned housewife Fanny Blankers-Koen sat at an incredible final sprint to, even overtook the leader, and actually reached even the already fourth for her gold medal. The sensation was perfect, the newspapers came thick with reports from the two-time mother and housewife who won four gold medals at the Olympics. After her return, she was greeted by a cheering crowd, in one fell swoop all the hostility against them were forgotten. The next day she was back mother and housewife, and cared lovingly for her children.

Fanny Blankers-Koen still won many more titles and introduced many other world records. She was nicknamed "The Flying Housewife" and was known by that title in the world. When she ended her career, she was an absolute superstar in athletics.

Fanny Blankers-Koen stood alone against the then society and proved that, contrary to the prevailing opinion of mothers could be successful sportswomen well. She gave many women and mothers in the following years, the courage to stand up for their beliefs, and so was a pioneer for women's sports around the world.

Fanny Blankers-Koen died on 25 January 2004 at the age of 85 years. From the international sports federation, she was elected "athlete of the century".