God gave me the talent to run

Fauja Singh: "Elderly should laugh a lot, live stress free and to break away from the idea of ​​being old" 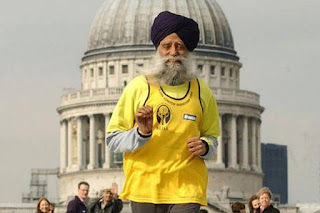 Fauja Singh was born on 01 April 1911 as a son of a poor farmer in India. Without proper education, he had to help in the most difficult conditions in agriculture and this was his purpose in life. In his youth he had been a talented runner and participated in several smaller races, but the times were far from easy. Fauja Singh witnessed the then British occupation of the country and the wonderful works of Mahatma Gandhi at first hand, as well as the independence of India in 1947. But his hobby he could exercise only briefly running, because in a later episode he had to take his wife and his children care. As a hard-working farmer, he toiled from morning till night in order to feed his family. By the age of 81 years, this was his most important task, when suddenly a terrible stroke of fate was to end this life.

Through a tragic accident, he lost his beloved wife. Fauja Singh fell into a deep existential crisis, and so he went to one of his sons to London in order to reorganize his life back to. But the western life was not easy for a man who had worked all his life as a simple farmer. Fauja Singh was very lonely, until he remembered old times, where he had been an avid runner in his youth. And so he made the incredible decision by a sporting break of more than 70 years back with the running start. He began to exercise regularly, even though people thought he was crazy because of his advanced age. But Fauja Singh this was no matter, he had found a meaning in his life and was again really happy for a long time.

Fauja Singh: "God gave me the talent to run, so I'm just gone"

Fauja Singh increased his stint running more and more and was already running up to 16 kilometers per day, where he ran a mix of running and walking. Once he had a fatigue break-what could well happen at his age, he was not exaggerating, and took his bus pass just the bus. But Fauja Singh had a strong ambition and held, despite his advanced age already be running training by constantly. And so he ended in 2000 at the age of 89 years already in London his first full marathon (42.195 km). An incredible success, which had not really given him credit for someone. But there was at the beginning of his career even more unpleasant scenes. When he denied the New York Marathon in November 2003, which took place shortly after the terrible terrorist attack on the World Trade Center (9/11), it was during its course repeatedly insulted as "Bin Laden" (leader of the attacks in America) because Fauja Singh always ran with his turban. But the courageous Indians put away this and could not despite the humiliation of people stop them to complete this marathon also internationally recognized successful.

But his masterpiece he created on October 16, 2011 in Toronto (Canada), as he was able to successfully finish the first centenarian and therefore as the oldest person a marathon. He had always wanted to achieve this goal, and he managed this without any medical care. Thousands of spectators cheered Fauja Singh, who ran in this race with a turban and matching number "100". By now he had become a celebrity among the marathon runners and found many new friends, which allowed him to overcome his life crisis for a long time.

An inconspicuous man from India worked as a simple farmer until his 81st year. Through fate and his passion for the sport of running, he managed very quickly to give his life a new meaning and launched an incredible running career. In his age group he set several world records and made it as the oldest person for the first time be able to finish a marathon. In addition, he was hired by the firm "Adidas" for a wide-ranging advertising campaign, his participation in various races, he used also to raise funds for charity. Meanwhile, he brought his biography entitled "Tornado with Turban" out and even the English Queen congratulated him with a greeting card to his 100th birthday. An incredible success story of a humble farmer, but what is the secret of his success?

Fauja Singh has always been a simple man. He never afford a luxury life and is less interested in material things. He eats healthy and generally has a balanced lifestyle. He does not smoke and does not drink alcohol. He feels good and independent, always has enough to eat and a roof over his head. He is optimistic about the future and is always setting new goals that give his life new meaning. He sticks despite his advanced age full of energy and shows with his attitude, that you can achieve anything in life, no matter how old you are. One has only to yourself and believe the success, no matter what other people think.

Fauja Singh: "Elderly should laugh a lot, live stress free and to break away from the idea of ​​being old"