The decision between life and death

Shinji Osada: "I think my tears were an expression of how much this victory meant to me. Winning there had always been my dream " 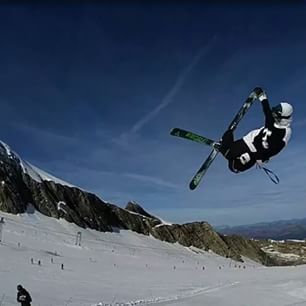 Shinji Osada was sensational on the podium of the Freeski Big Air contest in Canada. Suddenly, the young Japanese broke in front of the camera crews and many viewers in tears. While the winner normally only cheerful splash the champagne into the crowd and have a party, solidified the audience in front of this small Japanese man who was celebrating overjoyed and very emotional victory. For years, Shinji Osada worked hard on himself, and now he had finally fulfilled his long-awaited dream. But this was not the real reason, which was to explain the emotional outburst because Shinji Osada was fundamentally different from the other athletes.

Shinji Osada: "I think my tears were an expression of how much this victory meant to me. Winning there had always been my dream "

Shinji Osada was born with a complicated quadruple heart disease (tetralogy of Fallot). Even as a child he had to go through complicated operations in order not to die. The doctors gave the child any hope of ever being able to play sports with this serious heart disease. But Shinji Osada was already a real talent for movement, and the sports ban was not sustainable for the parents. And soon the little boy had a dream Sport for herself: freeskiing. Freeskiing is a type of skiing, it's about overcoming obstacles by impressive tricks with giant leaps. The parents had no chance to ban Shinji Osada the sport, too much of the will of the little boy had been. And yet he knew that could cost him his life this sport, but he did not want to hide a lifetime and let it get out of this disease.

Shinji Osada: "For me it was a decision between life and death"

Shinji Osada trained like a madman, because while most freeskiers came from snowy countries, he had to re-work everything. And everyone rehearsed jump could be his last. An unfortunate landing on his chest could be fatal or even fatal consequences for him. Shinji Osada sat down for this reason from the beginning only the highest possible targets because he had to go through his illness no time to lose and worked harder and willing stronger than all its competitors.

Shinji Osada, "I could die at any time. If that's so, I want to live with no regrets "

Shinji Osada fulfilled his dream and grew in spite of his severe heart failure to one of the best freeskiers in the world on. He is a celebrated hero in the sports scene and model for numerous people in his homeland because of his long history of suffering and its inexorable will.

Shinji Osada: "Whether I take part in sporting competitions or not, I'll probably die younger than other people, that's aware. Even if I die younger because of my sporting activities, I can be confident that my life was good "