Billy Mills: "Learn to know yourself and discover your desire"

Billy Mills: "In our Indian culture, it is, if you focus on something, then act together with body, mind and spirit and motivate you to realize your dream" 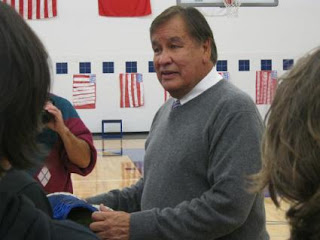 Billy Mills grew up in a run-down Indian reservation in the state of South Dakota (USA). The reserve was one of the poorest areas of the US, and life there was anything but easy. In this bleak environment more than 80% of people were unemployed and many were living below the absolute poverty line. Power there was in the rarest cases, the suicide rate was generally much higher than the normal average. Billy Mills had in reserve his loving parents at his side, but should shape his life only a short time.

When Billy Mills was eight years old, his mother died suddenly. The little boy was devastated, in tears, he collapsed again, he felt only hatred and anger. His father, who was himself deeply affected, his son tried repeatedly to comfort with the same words: "Son, your wings are broken, but one day you will have the wings of an eagle. You have so deeply for your dream looking until something miraculous happens to you and you realize who you really are. "His father was a short time die later, and Billy Mills was at the age of twelve years to an orphan. Henceforth to he had to fight alone through life, but he soon discovered his great passion in sports, running.

While many of his colleagues fell into alcoholism and drug addiction, Billy Mills trained tirelessly, also because he wanted to fight the feeling of inferiority of the Indians. He managed to find supporters through his talent and began to study at the University of Kansas. Nevertheless, he was marginalized again because of his background and harassed, in photographs he was told, for example, time and again that he should go out of the picture, because you did not want to have him here. Billy Mills even entertained thoughts of suicide, but in a new goal he thought he had found his destiny, namely the Olympic Games in Japan. Against the odds and exclusion Struggling with an impressive endurance he actually managed in the age of 26 to qualify for participation.

So Billy Mills came in 1964 as a completely unknown runners to Tokyo, where the Olympic Games took place. The favorite for the 10,000 meters race was the Australian Ron Clarke, the reigning world record holder, and some other world and Olympic champions. Billy Mills was seen only on the edge, neither the media nor the competitors themselves were expecting something from the young runner of Indian descent, who had never participated in such a big competition.

Billy Mills: "In our Indian culture, it is, if you focus on something, then act together with body, mind and spirit and motivate you to realize your dream"

More than 75,000 cheering people filled the stadium in Tokyo and the race already went into the final round. In little guidance was surprisingly the big favorite Ron Clarke, almost on a par with a strong Tunisians. But the sensation was Billy Mills, who is the only runners still managed to stick with the leaders. The race was already on the last stretch, and Billy Mills had some meters behind Ron Clarke. Nevertheless, no one reckoned with Billy Mills, because the leader was known as a strong sprinter. Billy Mills, however, thought in the final meters of the race to the words of his late father: "One day you'll have the wings of an eagle." With these thoughts the young runners mobilized his last strength and sat on one of the strongest final sprint that has ever existed in the history of Olympic Games. The reporters and spectators present could not believe their eyes, Billy Mills had opened already the top, it should here be witness of an incredible sensation?

It was one of the most magical moments in the history of the Olympic Games. A young outsider ran nearly a minute faster than he had ever run at the distance and won sensational the gold medal in the 10,000 meters. Never before had an American can win a gold medal at the distance. Billy Mills, an unknown runner who grew up in a poor Indian Reservation, stunned the world with his gold medal. Decisive were his monstrous self-belief and the will to achieve anything in life, if you look at it really wants.