Christiano Ronaldo soon made by his extraordinary talent a name on the island and was eventually, committed from Nacional Funchal, one of the biggest clubs in Madeira. Here he won the Junior Championship and was very successful, in addition, he developed his ball skills and his speed on the ball tremendously on. 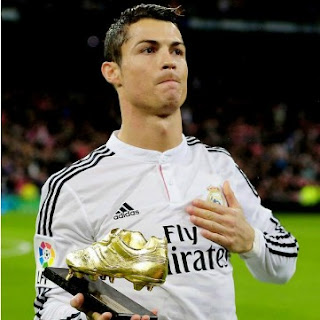 Christiano Ronaldo dos Santos Aveiro was born on 05 February 1985 at the small Portuguese island of Madeira. From a young age his passion was football, on the dusty back roads of Madeira he brought his first tricks even with. His talent was soon discovered, and as he moved at the age of seven years for the amateur club CF Andorinha, where his father worked as a kit man. The football field was just a few hundred meters from his family home, his beloved family was always close. For Christiano there was just football, everything else was unimportant to him.

Dolores Aveiro (mother): "When he came home, I always had to tell him that he should do homework. But he said only that he had not. Then he took a ball and ran away "

Christiano Ronaldo soon made by his extraordinary talent a name on the island and was eventually, committed from Nacional Funchal, one of the biggest clubs in Madeira. Here he won the Junior Championship and was very successful, in addition, he developed his ball skills and his speed on the ball tremendously on. He was different from his teammates, had incredible ambition and always had to be the winner.

Leonel Pontes (youth coach): "He always wanted to be the best. Be it in the table tennis, the billiards, the table football, or even in a simple race to see who's the fastest. In football, his team had to win "

And it came as it had to: talent scouts from Sporting Lisbon were noticed him and invited him to a trial. There his abilities were discovered quickly, and you wanted to sign him, but they had not reckoned with the parents of Christiano. They did not let her go so easily her son too much they loved him. But Christiano had already decided and begged so long and unceasingly until his parents had no choice, as yet comply.

Christiano Ronaldo: "Before the trial I could not sleep all night. I've never been in an airplane. I was very nervous, small and thin. But I was sure that I would make it into the team "

With nearly 12 years Christiano Ronaldo joined the football boarding school of Sporting Lisbon. For the first time he was separated from his friends and his family, who still were on the approximately 900 kilometers south of Lisbon nearby island of Madeira, and the first problems should be prepared quickly. His colleagues, who were every one or two years older than him, made fun of the little boy from the island. They mocked him because of his dialect, which was difficult for everyone to understand, and people excluded from Christiano. In his class, he was constantly ridiculed and called Inselaffe or banana farmer. Christiano but had a strong will and often struggled not only with words but beat with his classmates, all of which were bigger and stronger than he. At school he was repeatedly sitting and was once even suspended from a tournament because he threw a chair at a teacher. No one had respect for this boy, but soon he was to gain respect - and on the football field.

It was organized a training match, and the coaches wanted to get an overview of the football talents. As at school Christiano was not perceived at first and did not get a ball from his older teammates leaked to him the ball but suddenly fell at his feet. And what was to follow, let even the most hard-nosed coach not cold. An opponent wanted him to take away the ball, but with a fast and impressive body deception he had come to nothing it easy. As it tried two or three opponent, relieve him the ball, but again they failed. Christiano Ronaldo they umkurvte with such a speed and such a sophisticated technology that it could not believe the coach, they had not seen it with my own eyes. In the end, he turned already half the team in the way to be able to stop somehow. Henceforth all knew he was a very special player, and from now on Christiano developed day by day more and more respect. After just one season he was already the absolute star in his team and has become an absolute top players.

Carlos Diaz (youth coach): "I remember that we made him play half a game with their elders. It was in his first year, and he played with the 15-year-olds. When he was allowed to play only a half, he was crying afterwards "

Christiano Ronaldo was the first young people in the club's history of Sporting Lisbon, who was deployed within a season for the U-16, U-17, U-18, the reserve selection and for the professional team. In the summer of 2003 there was a friendly match against Manchester United, where Christiano was used at the age of only 18 years. In this match he demonstrated in an impressive way his skills through his tricky game he had rows off his opponent and demoted them to supporting cast. And these supporting actors were at the world's top football team, who had never seen such an exceptional talent. The former captain of Manchester United, Roy Keane, his pride and went after the game to his manager Alex Ferguson said, "Coach, this boy, the need we have"

Christiano Ronaldo was soon obliged on Manchester United and was for a few years already the most expensive footballer in the world, as he moved to the giants Real Madrid in Spain. He has won many titles, was national team of Portugal and was also FIFA World Player and European Footballer of the Year. A little boy from Madeira had the courage to leave his beloved family for his career in order to realize his dream. Gone are the times when he was ridiculed at school only by his incredible football talent he gained respect and recognition around the world.

Christiano Ronaldo: "I want to leave my mark in football, in the history of football. If I do so on if I stay humble and continue'm willing to learn something new, then I can really do it one day "