In A Foreign Island 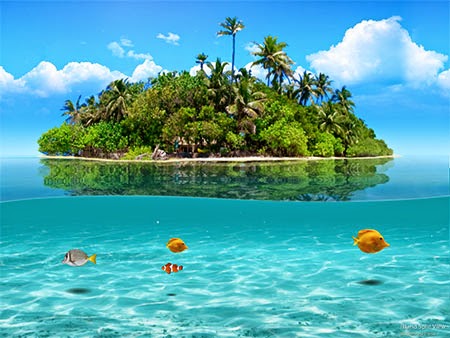 One day a man survived from a boat accident in the middle of the vast ocean. With a chunk of wood fragments ship he managed to pull over to a small isolated island uninhabited.

In desperation he prayed to God to save him from the island. Every day he looked at the horizon of hoping there will a ship come and saved him.

Tired and hopeless, he finally tried to live and defend themselves by making a small hut for shelter and start trying to survive. After a while he got used to living alone on the island.

One day he tried to hunt in the jungle behind the beach trying to find something that can be eaten. After a tired day of hunting, he returned to his hut which has been occupied during the time. But was surprised when he saw his hut had been razed to the ground, burned out. all that remains is a fire and dense smoke rising high. What had been striving for stranded and stay on the island runs no trace. In his heart he was getting angry and desperate.

"Oh God, why have you inflict this all to me!" he shrieked, blame to God for the accident. And that night he spent with sleeping in the open near the burning hut.

"How do you know there is people who need help?" he asked the lifeboat passengers.

"We are seeing signs of smoke that you turn on", he said.

It is easy we given up hope and blame God for all the bad things that happen to us. When in fact God's work and give the best, even though it looks painful and depressing. Remember, when you hit a bad thing, it may be a sign that God once again will show his love and fortunate.