Ilka Bessin: "I have walked down the tears" 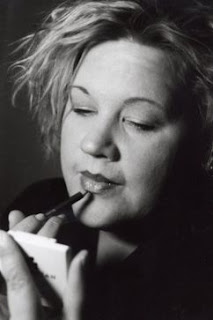 Ilka Bessin was born in the town of Luckenwalde (Germany) in 18 November 1971, her father worked as a truck driver and her mother as a seamstress. After the successful graduation she trained as a chef and the hotel business. Ilka Bessin worked as a cook, a waitress and as a managing director of a nightclub. But their passion was talking, she just loved to make people laugh by their extraordinary repartee. For this reason, she decided to work as an entertainer on a cruise ship to make her funny talent. The months on the ship were very promising and the passengers loved the special performances by Ilka Bessin.

But when Ilka Bessin returned to Germany, she was unemployed. She wrote countless cover letter to get a job, but to no avail. In time, they lost by the constant rejections their confidence, to find a suitable job. Ilka Bessin crept increasingly into her small apartment and took out of sheer grief strongly put on weight. In addition, she was treated disrespectfully and dismissively at the employment office, by her obesity, she had it very difficult to find a suitable job.

Ilka Bessin: "Suddenly you have no job, you're sitting around watching TV and eating. The hole in which I sat, was deeper. For me it was very bad "

In the period of unemployment Ilka Bessin developed a fictional character named "Cindy aus Marzahn" which as it an overweight long-term unemployed represented with only minor chances in the labor market. She wore a special pink clothes for her role and performed like a princess, which had a sarcastic view of life. Ilka Bessin summed up by their newly created artistic figure new courage and wanted to become self-employed as a comedian, as they very well could entertain people by their wit and their repartee. But Ilka Bessin was fobbed off with inferior commentary on employment office and they refused to support. The ignorance and unwillingness to give her at least a chance, you made difficult to create.

Ilka Bessin: "I have walked down the tears. Is bad if someone confronts you and not treated with respect "

Despite the setbacks Ilka Bessin tried not to let things get, trying to push her career as a comedienne. You could get a job at the "nonsense Comedy Club", where artists appeared to entertain people. Ilka Bessin now tried this unique opportunity to take advantage of its own. As "Cindy aus Marzahn" she now everything on one card, in order to convince the audience. Ilka Bessin delivered a quick-witted and eloquent show, people were quickly impressed by its cheerful and witty performance. At the age of 33 years, the unemployed Ilka Bessin was as "Cindy aus Marzahn" sensational win the final years of this show.

Through this surprising success soon recognized TV stations were on the unusual "Cindy aus Marzahn" attentive and wanted to take them under contract. Ilka Bessin now managed her breakthrough as a comedian, with her perky appearance she quickly drew more and more people under its spell.

Ilka Bessin had to overcome by their long unemployment many setbacks and disappointments. But exactly they made this greatest weakness to their greatest strength. With their created character "Cindy aus Marzahn" they processed their worst moments in this difficult time and used her experiences to use it for other entertaining jokes for the amusement of humans. She got thereby one of the most popular and best-known comedian in the German-speaking countries.

Ilka Bessin: "Many of my jokes are so authentic, because I have experienced it myself"