Jean Nidetch: "Weight Watchers is not a simple way to lose weight, it's a new way of life" 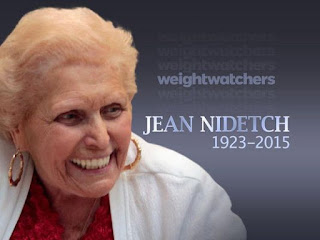 Jean Nidetch was born on 12 October 1923 in New York (USA) and had to fight since childhood with weight problems. She tried many diets and different diet programs, but with little success. Before long, the lost kilos returned again, and with them the feeling of frustration. Jean Nidetch was a confident woman, but with her secret fondness for sweets, they did not manage to lose weight permanently. One day she met an old friend at the grocery store, which assumed that Jean Nidetch because of their obesity was pregnant and wanted to congratulate her even more. Jean Nidetch, which now weighed nearly 100 kilos, was shaken by this opinion, and immediately made a decision that now finally the time had come to remove permanently.

But Jean Nidetch wanted no short-term diets more, she wanted a healthy diet in order to lose the long term so that weight. But Jean Nidetch also knew that this project had failed in the past many times and founded for this reason a support group with some other overweight women. She was determined, this time permanently remove, and this should succeed along with other victims. There weekly meetings were agreed upon, where the obese women should share experiences and support each other. Through these regular meetings, Jean Nidetch hoped to get enough motivation to endure the weight loss.

Although Jean Nidetch was not a trained nutritionist, but as a housewife and mother, she had to make a lot of experience with regard to food. Moreover, she was a good lecturer and was able to motivate other women in a remarkable way. Through these weekly meetings the motivation in the group always remained upright, and it actually worked. Driven by a euphoric Jean Nidetch managed all women including Jean Nidetch themselves to reach their desired weight. The successful meeting with Jean Nidetch were by word of mouth quickly became popular and more and more people wanted to attend.

Jean Nidetch: "Weight Watchers is not a simple way to lose weight, it's a new way of life"

Jean Nidetch was so impressed by this overwhelming outcome of the meetings that they decided to develop their method of weight loss. They created a program based on tables where all foods a certain point value was assigned. Through this fixed point set Abnehmwillige people now had an indication of their desired diet. In 1963, Jean Nidetch decided at the age of 40 years, to start a business, which she called "Weight Watchers" ("Weight Watchers"). This was also necessary because their new ideas for weight loss spread like wildfire across America.

"Weight Watchers" developed by Jean Nidetch which this also wrote several books, fast becoming the most popular and successful diet programs worldwide. The idea of ​​a separate point system for food and weekly meetings where you received tips and could exchange experiences, met the nerve of time. There was a huge market with many overweight people around the world, which had been waiting for an effective weight loss program such as "Weight Watchers".

Jean Nidetch took her own weight problems as an opportunity to launch an unusual initiative for a slimming program. A simple housewife altered by the lives of millions of people, which is now managed to reduce their excess weight in a healthy manner.

Jean Nidetch: "I could never imagine, with Weight Watchers to change millions of lives around the world to me"