Brownie Wise: "There is nothing new about the need for personal recognition. It is as old as mankind " 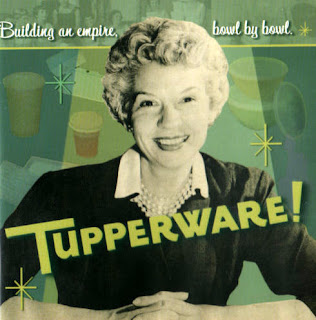 Brownie Wise was born on May 25, 1913 in the small town of Buford (Georgia, USA) and grew up in poverty. After her parents' divorce, she had already learn very early to get along for extended periods without their single mother, who was constantly on the move professionally. At the age of 14, she was allowed to come more often to the business with her mother and thus developed a charismatic and self-confident personality, just as it was important in the business world.

At the age of 23 years Brownie Wise was married and shortly thereafter already pregnant. The marriage did not last long, because her husband was steadily breaking down the alcohol. Brownie Wise was now a single mother and her son's financial situation was very grim. She earned her living by small-time jobs and also worked as a sales representative, where they experimented with how one could sell different products best. During this time she met Earl Tupper know which kitchen and household articles manufactured from plastic. He tried his wares for some time to sell in department stores, but had so little success. In those days plastic was rather insignificant in the households and people thought it was a highly flammable material that was easily broken. It relied on the usual materials such as metal, glass or porcelain. Brownie Wise was there, however, strongly disagree.

They immediately recognized the benefits of the practical plastic containers which could be airtight to thereby keep food fresh longer can. In addition, they were lightweight and available in a wide variety of colors and sizes. As a housewife, Brownie Wise knew to appreciate these benefits, but these were plastic boxes with people largely unknown. Since she had the idea of ​​a new sales model, which it had not previously existed in this form. She wanted the Tupper products by Tupperware parties of house market at home and especially appeal to women so that, as they were increasingly responsible for the budget. Brownie Wise was the goal, even train housewives to Tupper counselors, which are then also able to sell these products. But in that time, the business world was dominated by the men, why Brownie Wise had no easy start.

The role of women was firmly established, she was responsible for the housework, child-rearing, for cooking and for brushing. For these often physically strenuous activities the woman did not get recognition, as it was taken for granted. Many women were reduced only to its role as a mother and housewife and were therefore often unhappy and under-challenged. The men were satisfied with this situation, but Brownie Wise wanted with their novel business model of direct marketing to overcome this major barrier for women and already organized first and highly acclaimed Tupperware parties.

The Tupperware parties, which were held directly in the homes of women, soon became all the rage. Brownie Wise convinced passionate women of the Tupperware products, and this also with unusual methods. So she stood with one foot on the plastic bowls or tossed with filled containers to be to showcase the unique quality. By the way you celebrated a fun party, there was to eat and drink and you could meet up with friends. The charismatic Brownie Wise formed quickly from first Tupperware saleswomen, which itself could deter those Tupperware parties now to earn money with the sale. Housewives, mothers and wives now cleaned out and presented confidently Tupperware products, for which they received great recognition. Suddenly the woman stood in the middle of the action and the bewildered men moved into the background, because against these women's meetings had nothing to oppose.

Brownie Wise: "There is nothing new about the need for personal recognition. It is as old as mankind "
The company Tupperware grew in the years to become a global business approach. The Tupperware parties spread throughout the world like wildfire woman and no woman could resist the new Tupperware products. Brownie Wise became famous for her successful sales strategy, she has appeared on television and gave numerous interviews. In addition, it was ever printed was the first woman on the cover of "BusinessWeek".

Brownie Wise became the idol of every housewife and revolutionized the role of women around the world through these Tupperware parties. In a male-dominated business world they now were also women with little education the chance to gain independence and to participate in the Business successfully.

Brownie Wise: "What lies behind us and what lies ahead, things are tiny compared to what lies within us"