Charlie Chaplin: "Every day that you do not smile is a lost day" 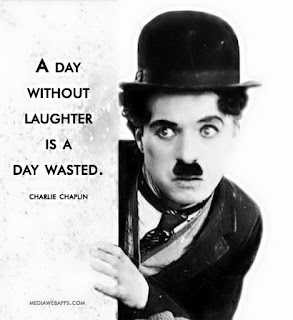 Charlie Chaplin was born on 16 April 1889 in England and grew up in a poor family. Shortly after his birth his parents separated and he stayed with his older half-brother on the mother. As Charlie Chaplin was six years old, his mother fell ill and could not take care of the family. Charlie and his half-brother had now looking into the workhouses of London hideout, since the father eluded the alimony. The life was marked by poverty, destitution and hunger. With smaller part-time jobs to Charlie Chaplin had been mucking around as a child, to afford scanty meals.

Charlie Chaplin: "I felt I had talent"

One of these part-time jobs were performances in the Music Hall of London. Charlie Chaplin showed in these entertainment shows as a child an extraordinary talent and a remarkable acting talent. Through this first stage experiences Charlie Chaplin discovered his love for acting and got first inferior theater roles offered as a little boy. When he was discovered one day by the famous theater producer Fred Karno, this had been so impressed by Charlie Chaplin that he immediately signed him. Especially humorous pantomime games were listed and the talented Charlie Chaplin quickly rose to the young star of the theater group. Soon the money worries of the past belonged to, and even the American film industry was aware of the young comedian, Charlie Chaplin moved to Hollywood to further his career.

After initial teething problems with the film companies Charlie Chaplin expanded its skills and managed the transition from theater to film. He constantly created funny characters, where he was able to put his jokes and punch lines perfectly. The demand for its unusual silent films rose very quickly and now Charlie Chaplin gained great notoriety. Through his success afforded to the film comedians soon additional freedoms and Charlie Chaplin was at the age of 24 years worked as a director for the first time. His films developed into a true blockbuster and it reached a financial and time independence, which for him meant the freedom to implement his creative and unconventional ideas. On his next incredible project should help him this autonomy, because he was planning a movie where he wanted to create one of the biggest dictators in the world, Adolf Hitler.

The filming for the parody "The Great Dictator" began shortly after the outbreak of World War II and Charlie Chaplin had everything planned down to the last detail. He wanted to expose his film Adolf Hitler and the German Nazism, and this with the weapons of comedy. He studied for weeks the gestures and facial expressions of Adolf Hitler in the newsreels and learned the typical movements of the German dictator. Charlie Chaplin left nothing to chance, he was not only leading actor and director, he also wrote the screenplay and the music of his film. He built elaborate scenes and was a perfectionist when it came to costumes and disguises. When the film was finished, Charlie Chaplin had but to fight with many problems.

There were some high-ranking politicians in America who wanted to ban the film because they underestimated the danger of originally Adolf Hitler and you also wanted to create unnecessary provocations. But Charlie Chaplin was stubborn and did not let forbid, because of potential protests, he moved the premiere a special trip to New York, where the movie "The Great Dictator" was premiered on October 15, 1940 his film.

At that time, where Charlie Chaplin produced this film, the worst crimes of Adolf Hitler were not yet known why some scenes were shown to harmless. But the comedian still managed brilliantly to expose the treachery of this regime. Despite many critical opinions of the film was economically very successful and Charlie Chaplin should keep with his disparaging evaluation of Adolf Hitler subsequently law. He was one of the few people who recognized the threat posed by Adolf Hitler early on and was brave enough to say so publicly. Charlie Chaplin believed always that you could catch all the culprits with wit and humor.

Charlie Chaplin died on December 25, 1977 aged 88 years. His great acting talent and his sense of purpose helped him a way out of poverty to find and ascend to one of the greatest film of all time legends. With courage and courage he sat through his film projects and settled despite obstacles never diverted from his chosen path. For his life's work Charlie Chaplin won an Oscar with the probably longest standing ovation in the history of this award.