How Hard You Fight To Your Beloved Family?

A pair of teenage girls selling nuts on the Road of Taiyuan, Shanxi province of China to get money for medical expenses of their father who suffered from leukemia. Both teenagers it is Wei Wenxia (19 years) and younger sister 16 years old. For the sake of their beloved father, they are willing to do anything, including selling nuts even very little profit.
Wei was a student in Shanxi University. Reporting from shanghaiist.com, Wei has two sisters who are still in high school in the city where they live, Xiaoyi city. Since her father was sentenced to suffer from leukemia, Wei and her family had to fight defray the cost of maintenance of the father. 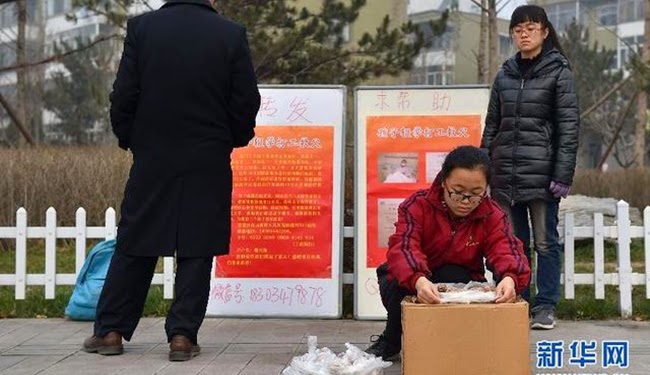 A break from school, Wei and her sister took to the streets and selling walnuts are grown by the family. Younger brother Wei also eventually returned home to help the businesses raise money for medical expenses of their father.
Wei explained that her father had to get treatment for a month in the hospital. Fee required is 70,000 RMB (14,000 Dollars). Cost was really not a small number of Wei's family. Not to mention the three treatment periods should be done later.
"Although selling peanuts to collect father's care costs as the vain, we will never give up," said Wei told reporters. Luckily, many people who have angel heart who donated some money for medical expenses of Wei's father.
To the nearest or your family members who are sick today, I hope you may healing. For those of you who are struggling to help the healing process of your loved ones, hopefully there is always a miracle. "When you have lost hope, you have lost everything. And when you think all is lost, when all is dire and bleak, there is always hope. "- Pittacus Lore.
Photo By; shanghailist.com