Have You Smile Today?

Liu Yiting fate is not as lucky as her friends. If other children busy in school, Liu even so in the street sweeper to help her grandparent. Six-year-old girl who is really not go to school, but the school would not accept her. Behind her sweet smile, there is a story that is so touching.
Reporting from shanghailist.com, after her parents divorced four years ago, Liu lived with her grandparent in Jinan. Grandparents worked as a janitor. Monthly money of her grandparent earning is about 3,000 RMB (500 dollars). 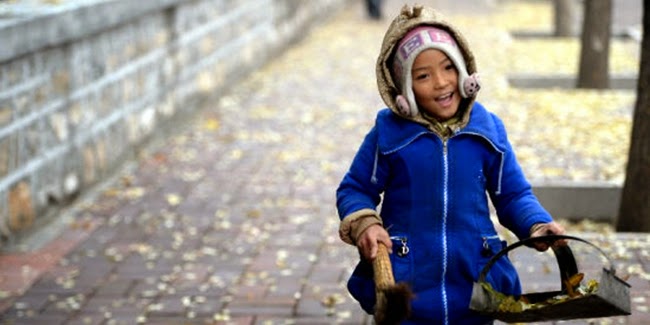 Liu's father is currently working Shenzhen, already a year old. While Liu's mother has never seen again since four years ago. In such circumstances, Liu so hard to go to school because hier grandparents did not have custody of Liu. Coupled with the fact that grandparents of Liu could not have social security documents from both Liu's parent.
Conditions experienced by Liu is already a serious issue in rural areas of China. Parents who live in small villages usually have no other choice but to move to the cities to find a job is more advanced. While their children will be left at home to be cared for by their grandparents. As a result, children become less affection from their parents. Not to mention the condition still many grandparents who do not get a decent education.
Although fate has not been lucky, Liu still can show a cheery smile when in front of the camera.
Childen like Liu's age should be able to get the go to school. Although the fate of Liu is currently less fortunate, but she still had the spirit of life. Although living in a narrow house no more than 10 square meters, Liu looks to continue to enjoy life without despair. She is also willing to go to the streets and help grandparents clean up the fallen leaves.
And, look at this little girl's smile. Despite having to go to work hard,s he still threw a sweet smile in front of the camera, have you smiled today?
Photo By; english.sina.com