The Last Wish Of Bopsy

(* based on a true story as retold from wanttoknow.info about the last wish from a boy who suffered from leukemia). A young mother 26 years old was bowed. She recently told by a doctor about the results of his son medical tests. Leukemia. Terrible scourge that allegedly attacked his son. Like the other mothers, she also wants to see his son grow up, cheerful, and achieve the goals, get married and give her grandchildren. But all dreams it seems will soon have to disappear, because leukemia is not easily curable disease, and there is no medicine that can cure effectually.
"Is it true that I should let my dreams will destroyed because of this disease, Lord?" she moaned inwardly.
***
One day, she thought she won't to let her son lose the dream. Although not a long time, at least there are things she wants to do for the sake to making her son happy.
"Bopsy!, what is the most you dream when you grow up? Do you ever have a dream to do something or be someone that you wish?" asked the mother. 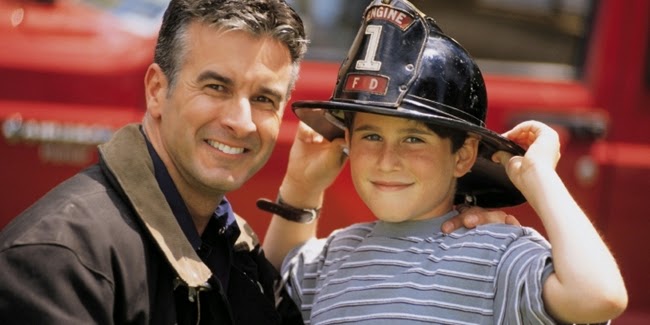 "Oh yes, mom, I want to be a fireman when I grew up," he said excitedly.
"Well, let's see if we can grant your wish later," his mother said with a smile.
Do not wait too long, when her son was still lying in the hospital, the mother went to a fire station in Phoenix, Arizona. She met with a firefighter who was very kind. She describes the condition of Bopsy and asked her if he could help, if allowed to drive around the block of houses with a fire brigade car?
Bob replied, "yes mam of course, we can even do more than that. Wednesday morning tomorrow you can bring your son here at 7 am, then we will be making it a honorary fireman in a day. He can come here, eat together with us, join answering emergency calls and work with us. We'll keep it. and if we could know how the size of his clothes, we will create a uniform firefighters and a real fire hat, not a toy. Complete with emblems, as well as the usual rubber shoes we use. our factory can make it special for him. "
Touched and glazed, the mother wiped the tears that had fallen to listen to concerns of people who did not even know.
How Bopsy got through the day as a firefighter?
***
Three days later, Bob gave uniform to Bopsy and pick him up from the hospital, climbed to the top of the fire truck, where he sits on the lap of Bob.
There are three emergency calls that day, and also participated Bopsy got to answer the call. The action is even filmed by a local television, where in the end he was able to realize the final dream.
Due to its happiness, Bopsy's life got 3 months longer than expected physician.
***
The last day of Bopsy ...
Night where conditions Bopsy got greatly decreased, senior nurses do not want to miss the Bopsy got last night alone. She began to call the whole family to come to the hospital. She also remembered the story about Bopsy got into a fireman, she was trying to reach a fireman with hope at least there are representatives of firefighters who take care the departure of Bopsy.
Unexpected, Bob answer it (again). He said he would arrive at the hospital within five minutes. He will also bring along with a fire truck complete with the brigade of them. They will not come through the door, but go up the stairs and entered through the window.
So Bob went into the treatment room Bopsy, he realized. "Mr. head of department, am I really a fireman now?" he asked weakened. "Yes Bopsy, you're a fireman now," replied Bob.
Bopsy got finally died with a happy smile on his face. His dream tobe a fireman becoming true by the mother and caring people who are full of love.
Because life is very precious, let's filled with things that are happy and useful to others. Spread love to the world, yes we can make this planet better and full of love.
Photo By; thinkstockphotos.com