Ray Charles: "I was all alone, because my mother died" 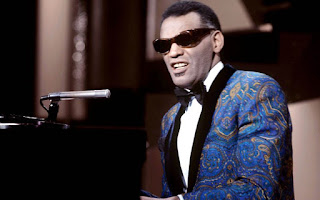 Ray Charles was born in the city of Albany (US state of Georgia, USA) on September 23, 1930 and grew up in poor circumstances. In the difficult economic times, people had to fight hard to get make ends. So there were in dilapidated accommodation where Ray Charles was growing up, no running water. At the age of five he had to overcome a severe blow when he had to watch helplessly as his little brother drowned in a wash tub. Just a few months later by the next terrible news, as Ray Charles from glaucoma (glaucoma) ill. Since we could not afford medical treatment, he went blind at the age of seven years completely. Ray Charles now had to suddenly find their way in a dark world for him, which was still dominated by a problematic to racial segregation. Blacks were oppressed and marginalized in many areas of life, for the dark-skinned Ray Charles, this was not good prospects.

The mother did everything for her son to raise him as independent as possible. Ray Charles had to help in the household and was allowed to move freely outside the house, so he learned to deal properly with his disability also. Ray Charles managed soon by his sensitive hearing, to be based in the area. He had a penchant for music and sounded in nearby pubs repeatedly blues records at. When his mother sent him to a school for the blind, he was able to develop his musical skills. He learned to play piano and clarinet, he also brought the game with the saxophone itself in. Ray Charles sang in a small gospel choir and showed despite his visual impairment incredible talent, the music was now his main purpose in life.

Shortly before his 15th birthday his mother died unexpectedly, which had been the most important person in his life. Ray Charles broke then the school and tried to earn his living with music, but as dark-skinned, and moreover blind musician, he had a hard time. He repeatedly got into racial conflict, where he was but constantly discriminated against as a black man in the white society , Ray Charles had to fight hard, but he improved his skills at the piano and his voice more resistant. He was able to get smaller part-time jobs as a singer and came from time to time under in music bands. With the puny Gage but he could barely stay afloat and had often not enough money to afford the food can.

Ray Charles: "I was all alone, because my mother died. I had the music and worked for anyone who paid "

At the age of 17 years Ray Charles moved to Seattle (Northwest USA) to further his career as a musician. Charm and without eyesight, he now had to find their way in a strange city, but he was not discouraged by it. He knew that there were bars, which had open all night and where he could be active as a singer and pianist. He formed his own band and toured the nightclubs, where he rapidly made a good name through his extraordinary talent. When the first records were recorded, this came at the people so well that they were all sold very quickly. Large record companies were now aware of the blind singer and this was the start of a great career in music. Ray Charles sang and played his songs with a lot of feeling, but he was also a perfectionist, because it had to fit every little thing, just like the members in his ensemble.

Ray Charles: "I can tolerate a lot, but by no means people who do not know their instrument"

Ray Charles began systematically to develop his own style of music. Daring he combined blues, country, R & B and gospel elements as he deemed fit and stormed with this new musical direction the charts across the country. He started to play major tours everywhere in the world and rose to a genuine superstar in the music industry. He also campaigned against racial segregation and demanded at every concert that all people were confused, whether black or white color, without any preference. He wanted his music for everyone to play, who wanted to hear them.

Ray Charles: "I try to create feelings, so that people get goosebumps"

Ray Charles revolutionized with his new style, the entire music world and was regarded as a pioneer of the soul music. He managed to get through as a black musician to the listener white layer and thus went as a legend in the history of music.

Ray Charles died on 10 June 2004 at the age of 73 years. He always refused to use a guide dog or a white cane, but he always found the right way.

Ray Charles: "For what is important in my life, I do not see necessarily"