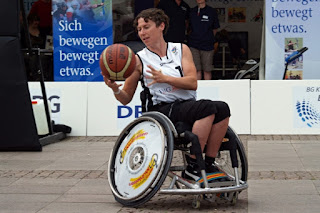 Natalie Simanowski was born on 20 July 1978 in the city of Lingen (Germany) and was a passionate athlete. Despite some setbacks, she trained very hard and was thus able to achieve some significant success as a runner in athletics scene. Life as a competitive athlete, however, should suddenly take a bitter end. When Natalie Simanowski was on the road on 25 June 2003 to her car, she did not notice that it has been reported by a stranger.

On this day, the 24-year-old woman wanted to bring documents to her car when suddenly a psychopath your reason rammed from behind at sneaking and a knife in the back. The downed Natalie Simanowski immediately came to the hospital and was lucky not to have been killed in this attack. Because the police the mentally ill man tracked, it was learned that he heard voices, having to kill any woman. Natalie Simanowski was just at the wrong time in the wrong place, and this has had serious consequences for the rest of her life.

Natalie Simanowski: "My legs sagged away. I knew immediately that it is something bad "

The diagnosis was devastating, because Natalie Simanowski suffered from an incomplete paraplegia, from now on, she was paralyzed partly from the eleventh thoracic vertebra. The psychological burden for Natalie Simanowski was enormous, because a few days ago she was still a promising athlete, now she was to be on the way to becoming a nursing case. She lay in bed with diapers, had to rely on outside help and had to contend with a strong feeling and movement restriction. But one thing she was also aware, because they have now as well can also be dead. With these thoughts she appreciated life now much more and began in a grueling rehab overthrow.

Natalie Simanowski: "The first few weeks in the hospital were terrible"

By month-long hospital stays and treatment could speed up their healing process under the circumstances quickly. Despite many difficult hours Natalie Simanowski never gave up and worked resolutely to bring your body back into shape. She managed to give her life a new meaning and to face new challenges. She was instructed by their handicap on the legs mostly to a wheelchair, she decided to concentrate on cycling. With a large effort and a special carbon track, she managed to switch to a road bike. Her great willpower, it was thanks to that it was not only taken up by the German Disabled Sports Association in the Sponsorship Program, but also to rise to one of the best disabled cyclist Germany. It was not just cycling world champion, but pulled even medals at the Olympic Games for people with disabilities.

Through the heavy knife attack while body parts of Natalie Simanowski were paralyzed, but her life will remained unaffected. While others would have given up by this injury, it looked as Natalie Simanowski launch of a new phase of life. With unyielding hope she worked her way forward step by step and managed to realize their new dreams and goals. Thanks to their positive mental attitude she became a model for other disabled people that you could at any time make a fresh start in life.